Twenty-three years ago today, Jeff Widener ran out of film during the most important assignment of his life 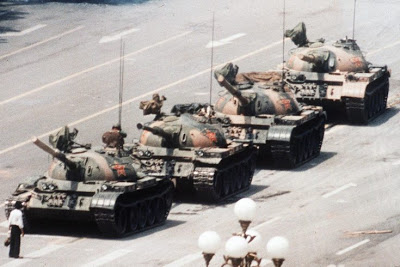 Jeff Widener—AP
A Chinese man stands alone to block a line of tanks heading east on Beijing's Changan Avenue in Tiananmen Square on June 5, 1989. The man, calling for an end to the recent violence and bloodshed against pro-democracy demonstrators, was pulled away by bystanders, and the tanks continued on their way.


The brutal crackdown at Tiananmen Square was underway and Widener, a photographer for the Associated Press, was sent to the square to capture the scene. “I rode a bicycle to the Beijing Hotel,” Widener says. “Upon my arrival, I had to get past several Chinese security police in the lobby. If they stopped and searched me, they would have found all my gear and film hidden in my clothes.” But there, in the shadows of the hotel entrance, he saw a long-haired college kid wearing a dirty Rambo t-shirt, shorts and sandals. “I yelled out, ‘Hi Joe! Where you been?’ and then whispered that I was from AP.” Widener remembers. He asked to go to the young man’s room. “He picked up on it,” says Widener, “and out of the corner of my eye I could see the approaching security men turn away, thinking I was a hotel guest.”