US Premiere of Underfire: The Untold Story of Pfc. Tony Vaccaro at Boston Film Festival September 22 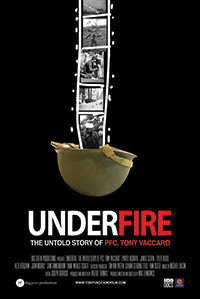 
BOSTON – September 12, 2016 – The 2016 Boston Film Festival program presents a panorama of striking projects that include “American Wrestler: The Wizard” (starring Oscar winner Jon Voight and William Fichtner, “Crash,” “The Perfect Storm”) and “The First Girl I Loved” -- along with the U. S. premiere of the documentary “Underfire” and the East Coast premiere of “Finding Oscar” (produced by Oscar winner Steven Spielberg). Many of the films address themes of acceptance, tolerance and bullying, timely and urgent concerns in contemporary society.

In the Opening Night U.S. Premiere documentary “Underfire,” World War II veteran Tony Vaccaro fought as an infantryman before returning to begin a successful career as a renowned commercial photographer. As a 21-year-old soldier, Vaccaro’s story began in combat as he took over 8,000 photographs on the front lines – harrowing and personal images that were not made public until the 1990s. The director is Max Lewkowicz from Dog Green Productions and HBO/Cargo Films. Max Lewkowicz and Tony Vaccaro will be in Boston for the film premiere.