Pasatiempo, Friday, February 3, 2011
Pasatiempo is the in-print, nationally-acclaimed, arts and culture magazine published by The New Mexican. "Vivian Maier Discovered" is the feature article in today's edition, click to enlarge:. 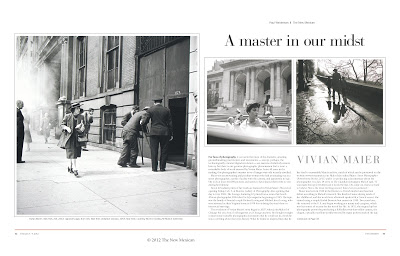 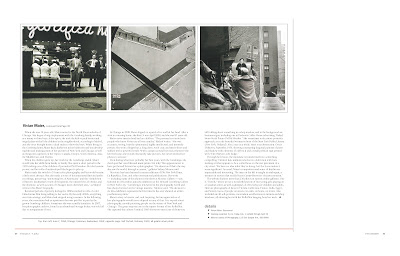 Santa Fe woke up to a surprise snowfall this morning, and for a while travel was difficult. But, the sun is out and all roads are clear now. Please join us tonight from 5 - 7 as we celebrate the opening of the exhibition "Vivian Maier: Discovered". (And enjoy the skiing later!)

EYE ON THE STREET

Photographer Vivian Maier, showing at Monroe Gallery, was almost never discovered
By Kate McGraw
The Albuquerque Journal North
February 3, 2012
For the Journal
An international sensation is coming to Santa Fe.
In the past couple of years, the world of photography has been shaken by the discovery of a cache of negatives and undeveloped film rolls shot by a woman named Vivian Maier. The discoverer, a photographer and collector named John Maloof who lives in Chicago, found the trove in a couple of trunks he bought at a 2008 public auction of items from a storage unit. 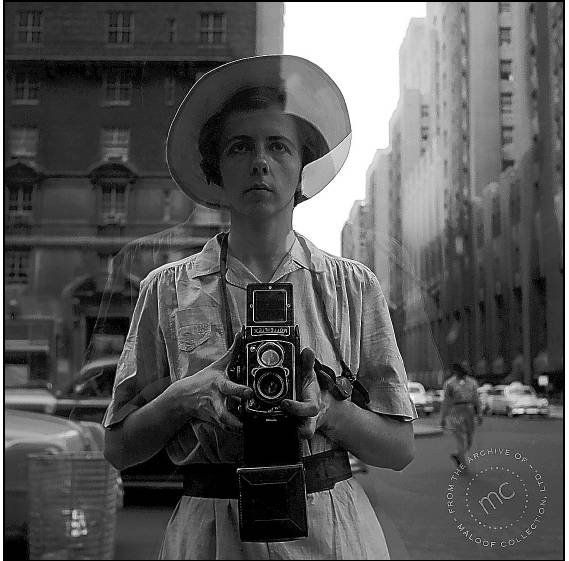 Curious, he began printing the negatives and realized that they were what is called “street photography;” that is, pictures taken on the Chicago streets in the 1950s and ’60s. But these weren’t just good photographs, Maloof decided, they were great.

Finding her name on a photo-lab envelope, Maloof Googled Vivian Maier and discovered that she was ill. By the time he made up his mind to try to reach her in 2009, she had died at age 83.

He began working with curators and photographic experts, all of whom were as excited by his find as he was. In the past 18 months, Maloof has spread the word about this extraordinary photographer. Her photographs have been shown in the United States and Europe, and published in a book about her and her work, “Vivian Maier: Street Photography” (PowerHouse Books, 2011). An exhibit of 35 photos of her photos opens today at Monroe Gallery of Photography on Don Gaspar Avenue.

The story has spread and been told in The New York Times, National Public Radio, La Republica, TIME magazine, The Wall Street Journal, The Independent, the Guardian, Vanity Fair, CBS News, Smithsonian magazine and elsewhere. “Maier is posthumously being recognized as one of the greatest American street photographers of the 20th
century,” gallery owner Sidney Monroe said in a written release about the show.

“The story is really fascinating,” Monroe said in a separate interview. “Little is known about her. She was born in New York in 1926 and she worked as a nanny in Chicago all her adult life. When at the end of her life she was very poor, some of the children she’d taken care of banded together and took care of her. She never talked to anybody about her photography and never showed it to anyone.

“John Maloof has spent four years with some of the best photography curators doing research and cataloguing her work, to preserve her legacy. It’s become his full-time avocation. Her work is not only good but shockingly good,” Monroe said. The 35 prints being shown in Santa Fe are a selection by Maloof and Monroe, some of them also seen in the book. Copies of the book will be available at the gallery.

Reportedly, Maier was a quiet, almost aloof person who often was seen on the streets of Chicago with a Rolleiflex camera around her neck. People posed for her willingly, apparently never asking themselves what she was doing with the pictures. She managed to amass more than 2,000 rolls of film, 3,000 prints and 100,000 negatives that she shared with virtually no one during her lifetime.

Her black and white photographs form indelible images of the architecture and mid-century street life of Chicago. She rarely took more than one frame of an image and seemed to concentrate on children, women, the elderly and the indigent.

There are also a series of striking self-portraits and a series of prints from her many travels to Egypt, Bangkok, Italy and the American Southwest.

“Maier’s subject,” Monroe said in his description of her work, “is the interaction of the individual and the city in the 1950s through 1970s. She scouts out solitaries of all ages and frames them in poignant juxtapositions. Her pictures have the tug of effecting urgency.”

Monroe obviously is as infatuated with Maier’s story and work as Maloof and the other curators. “It is hard enough to find this quality and quantity of fresh and moving images in a trained photographer who has benefited from schooling and a community of fellow artists,” the veteran photography enthusiast wrote. “It is astounding to find it in someone with no formal training and no network of peers.

“Yet Vivian Maier is all of these things,” he added. “The photographs are amazing, both for the breadth of the work and for the high quality of the humorous, moving, beautiful and raw images of all facets of city life in America’s post-war golden age.”

John Maloof
Maloof is almost as interesting as the woman whose legacy he has been fighting to rescue. A native Chicagoan, he is a collector and writer who has become a street photographer himself in response to working with Maier’s photographs.

“I guess you can call me a street photographer. I always have my camera with me to document interesting moments or stories I come across in my life. I’m not a commercial photographer and not interested in becoming one. Photography is a personal obsession of mine,” he wrote in a blog on his own website.

Maloof also created vivianmaier. com, where he has written about his work on her behalf, always calling her by her first name. After so much work reviving her imagery, it appears, he seems to feel a kinship.

“I acquired Vivian’s negatives while at a furniture and antique auction while researching a history book I was co-authoring on Chicago’s Northwest Side. From what I know, the auction house acquired her belongings from her storage locker that was sold off due to delinquent payments. I didn’t know what ‘street photography’ was when I purchased them,” he blogged.

“It took me days to look through all of her work. It inspired me to pick up photography myself. Little by little, as I progressed as a photographer, I would revisit Vivian’s negatives and I would ‘see’ more in her work,” he wrote. “I bought her same camera and took to the same streets, [only] to realize how difficult it was to make images of her caliber. I discovered the eye she had for photography through my own practice. Needless to say, I am attached to her work.

“After some researching, I have only little information about Vivian. Central Camera (a 110-year-old camera shop in Chicago) encountered Vivian from time to time when she would purchase film while out on the Chicago streets. From what they knew of her, they say she was a very ‘keep your distance from me’ type of person but was also outspoken. She loved foreign films and didn’t care much for American films.

“Out of the more than 100,000 negatives I have in the collection, about 20,000-30,000 negatives were still in rolls, undeveloped from the 1960s-1970s. I have been successfully developing these rolls. I must say, it’s very exciting for me. Most of her negatives that were developed in sleeves have the date and location penciled in French (she had poor penmanship),” he added.

“I found her name written with pencil on a photo-lab envelope. I decided to Google her about a year after I purchased these only to find her obituary placed the day before my search. She passed only a couple of days before that inquiry on her. I wanted to meet her in person long before I found her obituary but the auction house had stated she was ill, so I didn’t want to bother her. So many questions would have been answered if I had,” he wrote sadly.

“Over the course of scanning her work I’ve discovered that Vivian traveled the world in 1959. She visited and photographed places like Egypt, Bangkok, Thailand, Taiwan, Vietnam, France, Italy, Indonesia ... the list goes on. Something also notable is that she traveled alone.”

Maloof added that he wanted to thank everyone for their support and encouraging emails.

“There’s a lot of weight on my shoulders and I hope I’m doing the right thing for Vivian’s legacy,” he said.

If you go
WHAT: “Vivian Maier: Discovered,” posthumous exhibit of street photography
WHEN: Today through April 22; reception 5 to 7 p.m. today
WHERE: Monroe Gallery of Photography, 112 Don Gaspar
CONTACT: (505) 992-0800; monroegallery.com 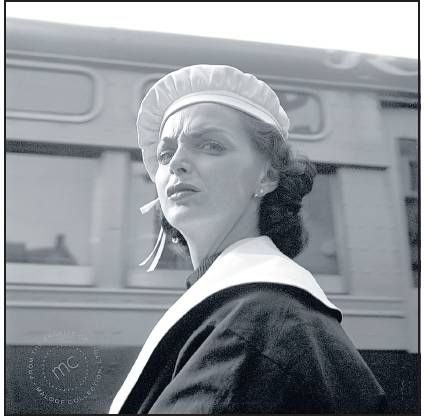 COURTESY OF MONROE GALLERY OF PHOTOGRAPHY

This September 1956 photograph shows a woman standing next to a bus. Titled “Sept., 1956, New York, N.Y.,” it was taken by street photographer Vivian Maier. 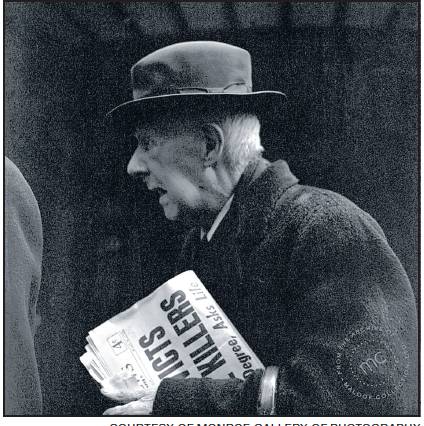 COURTESY OF MONROE GALLERY OF PHOTOGRAPHY

This untitled photograph of a man carrying a newspaper was taken by Vivian Maier in Chicago. 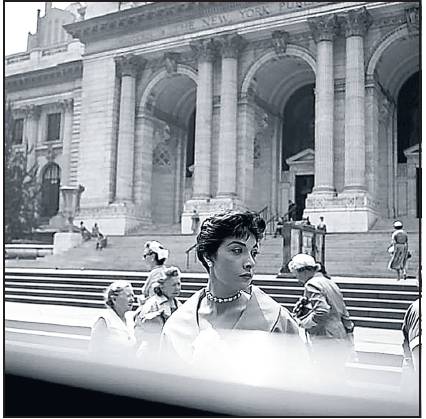 “New York, Undated” is a gelatin silver print from a photograph by Vivian Maier. 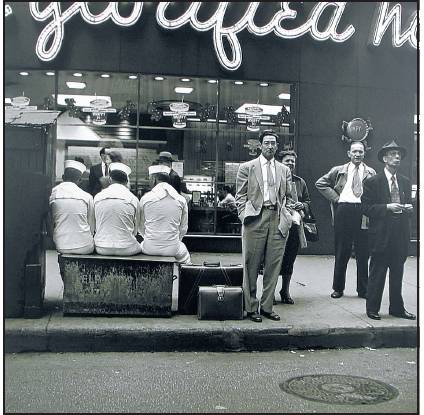 “June 7, 1956, Chicago” is a gelatin silver print from a photograph by Vivian Maier. 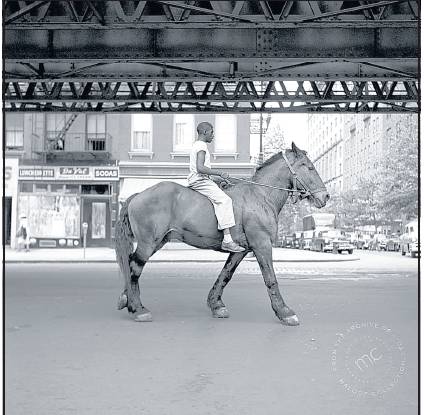 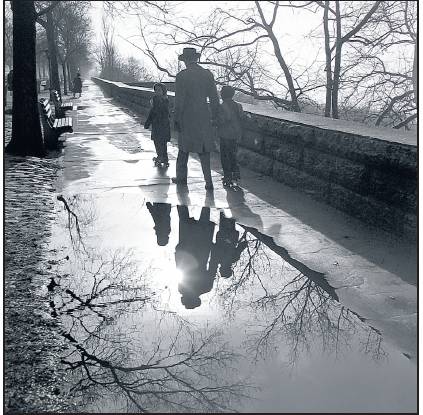 Everyday People:  Vivian Maier was essentially unknown throughout her lifetime