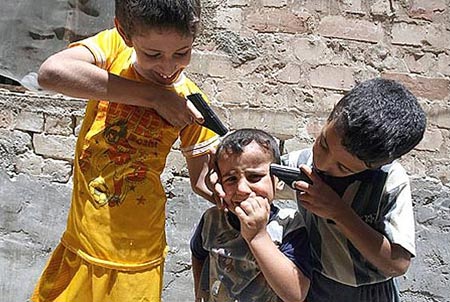 "They did not have the spirit of childhood in them... They acted like men."

That's an observation by AP photographer Hadi Mizban as he narrates an interactive presentation of his photographs and video chronicling the evolution of children's play in one of Baghdad's most violent neighborhoods.

For years, Mizban has covered clashes there between militants and soldiers — and along the way, he has gathered powerful images of children living at the doorstep of war.

"They played with weapons because whenever they opened their front gate they found people with weapons," he says, speaking in Arabic.

In his chilling images, kids act out roles they have witnessed. Young boys with toy guns take a cowering hostage. Others threaten a girl and snatch her doll. They move through narrow alleys with miniature walkie-talkies and rocket launchers that look all too real.

But lately Mizban has noticed changes in the kids: "They've gone from aggressive children to peaceful children."

As his video shows, they play soccer on the dusty streets now. They wear jerseys of international teams like Real Madrid and pretend to be famous players — instead of insurgents, soldiers or criminals.

In these images, the Baghdad kids could be happy kids anywhere.

Mizban reflects on his reporting about the youngest in society: "You have to document the situation without blinking. But when you shoot pictures of children playing, children laughing, there is hope."