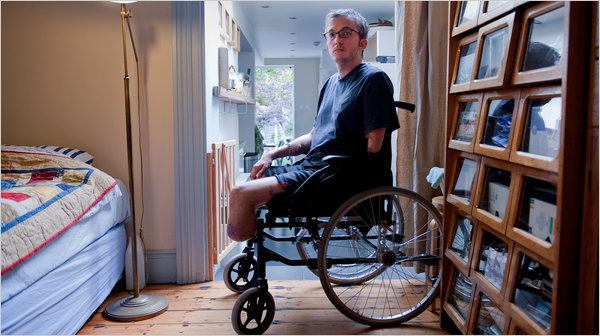 "I have never seen myself as seriously wounded," says Giles Duley.


TO the annals of understatement and optimism add this: the account of Giles Duley, an independent photographer, about the moment after he stepped on a hidden bomb while covering an American and Afghan infantry patrol.

Mr. Duley heard a click and felt a flash of heat as the explosion lifted him into the air. He landed on his side on the dirt, roughly five yards from where he had stood. He smelled the stink of the explosives mixed with that of his own burned flesh. He took stock.

“I remember looking up and seeing bits of me and my clothes in the tree, which I knew wasn’t a good sign,” he said. “I saw my left arm. It was just obviously shredded to pieces, and smoldering. I couldn’t feel my legs, so straightaway and from what I could see in the tree, I figured they were gone.”

Mr. Duley had become, in that flash, a triple amputee. Now he risked swiftly bleeding to death. He recalled uttering a single word: “bollocks.”

As the American soldiers he had been walking with rushed toward him and began tightening the tourniquets that would save his life, a fuller line of thought took flight. Rather than tally what was missing, Mr. Duley counted what remained.

Mr. Duley, 39, was wounded in February in Kandahar Province, becoming another in the long line of casualties in the Pentagon’s offensive to displace the Taliban from one of its rural strongholds.

Five months on, after leaving the hospital, he is roughly midway through a 12-week physiotherapy regimen at Headley Court, a military rehabilitation center near London.

There, freshly fitted with two prosthetic legs and a left arm, he has been relearning to walk and confronting the details of pushing forward in life. Pulled along by what would seem an incurably upbeat mind, he is making plans to return to work as a photographer.

WHEN he set out for Afghanistan, Mr. Duley, a former fashion and celebrity photographer who changed his focus to cover what he considered untold stories of human suffering and resilience, had been preparing to start a quarterly photography journal, to be called Document.

In an interview at his sister’s home in London during a weekend furlough, he said the project had not been derailed by his wounds. He said he hoped to publish the inaugural issue next year. But before doing so, he said, he wants to return to the field.

His first planned trip? Back to Kandahar, to photograph the medical treatment of Afghan civilians.

The technicians who fashion the prosthetic limbs at Headley Court are crafting a stubby prosthetic arm that will be fitted with a tripod head. To this, Mr. Duley said, he will attach a camera that he will raise to his eye, and then get back to work.

“You see?” he said, demonstrating how he can move the remaining portion of his left arm. He swung the stump quickly to his face. Then, with his right hand, he depressed an imaginary shutter button on an imaginary camera hovering where his arm came to its abruptly severed end. “The length is just about perfect,” he said.

Mr. Duley’s misfortune has made his own life resemble those of the profile subjects he once sought. But he has framed his lot not as a tragedy — “I have never seen myself as seriously wounded,” he said — but as a life-altering hardship that contains opportunity, too.

As a triple amputee, he said, he hopes to channel interest in his own struggles into bringing more attention to the suffering of other people. “For me to make sense of what happened to me, I have to make it advantageous to the work I do,” he said.

If this cheerful blend of pragmatism and editorial sense could seem to suggest that his journey has been easy, do not be deceived. Mr. Duley has traveled a terrifying path.

Soon after he was wounded, complications set in. Laboring on a respirator, he nearly died from a lung condition and soaring body temperatures in his first weeks in England. On Feb. 26 his family was called at night to his bedside, told that he might not last until dawn.

If ever there was a thought that distilled a will to live, it was this.

By mid-March he was awake again. A new test began — trying to learn how to sit up and how to move, much less walk. With only one limb, and weakened by illness and from weeks of being almost motionless, he could not even drag himself along the floor.

ONCE the picture of self-sufficiency, he discovered that until he restored his physical fitness and learned to use prosthetic limbs, he would remain, in a word, a dependent. These indelible facts were made miserably clear in late April when, while trying to wash, he toppled from a shower stool.

There on the tiles, bleeding from a stump and unable to right himself or move anywhere, he was carried away by three nurses. He was naked. And crying. “That was the absolute bottom,” he said.

Since then he has been in almost continuous sessions of exercise and therapy, pushing himself upright and making himself start to walk, while accepting, he said, “that no matter how good I get, I will always keep falling.”

Other problems remain. He expects to undergo three more operations this year — a colostomy reversal, the removal of a bone spur at the end of his shattered right femur, the excision of balled nervous tissue in his left arm. He anticipates further surgeries in the years beyond.

All the while, he suffers from a particular affliction of the amputee: phantom pains, the excruciating alarm calls from limbs that no longer exist.

“Right now what I feel is a crushing sensation there,” he said, looking toward where his right foot would be. He added: “And there is on fire,” glancing to where he once had a left hand.

He said he had been told that these pains may never go away.

His balm is not painkillers, which he said he ceased taking a few weeks ago. It will be, he said, to restore his mobility and carry on.

For now, that means rounds of exercise alongside soldiers whose limbs were lost in the same ways. Gaining access to their regimen at the rehab center was difficult. Some in the government bureaucracy tried to block Mr. Duley’s admission.

Many objections were raised, including that as a civilian nearing 40, Mr. Duley was not in the same physical condition and mind-set as the young military men he would be working beside.

Three limbs gone, spirit whole, the photographer smiled as he recalled the exchange. “Don’t worry,” he said he jokingly assured the medical official who advanced that argument. “The soldiers will learn to keep up.”