When Cool Was King 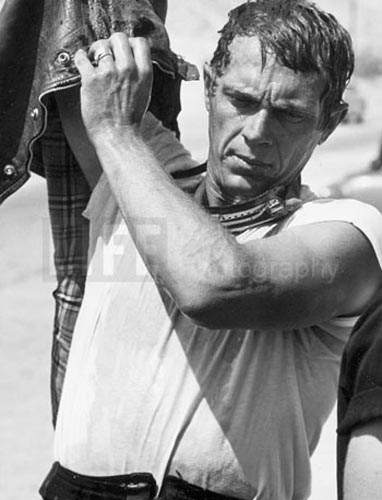 Asmokey barroom is filled with dancing couples, but Johnny Strabler stands alone, leaned against the jukebox and tapping his fingers to the music. A laughing blond sashays past him to ask â€œWhat are you rebelling against, Johnny?â€ Pausing, Johnny studies the floor before responding, â€œWhaddya got?â€ â€”from The Wild One
IN THE WILD ONE, MARLON BRANDO PLAYS THE CHAIN-SMOKING, down-on-his-luck Johnny Strabler, who drawls his way through the movie with a nonchalance that occurs as both practiced and organic. Brandoâ€™s 1953 portrayal of Johnny was in many ways a wholly American testament to the eraâ€™s mood of glamorous unease, collectively funneled into the films, music, and cultural ephemera of a nation. If Johnny Strabler is one of Brandoâ€™s most memorable characters, heâ€™s also one of his quintessentially coolest. Its been said that Americaâ€™s most valuable cultural contribution is the concept of coolnessâ€”that intangible slick something that separates the Millhouses from the Bart Simpsons of the world. Before the middle of the twentieth century, teenagers werenâ€™t thought of as tastemakers, but several factorsâ€”most famously, of course, the hip-swiveling music of Elvis and the raw gospel funk of James Brownâ€”changed all that, and suddenly young people became arbiters of the trends that mattered. This represented a major separation between the hip and the square, and nobody had more influence than movie stars and musicians. Monroe Galleryâ€™s fantastic exhibition When Cool Was King consolidates the look and feel of â€œcoolâ€ into a tautly grouped showcase of some of its most notable harbingers. Dean Martin, Lou Reed, and John Lennon are joined by a handful of others whose effortless style and nonchalant attitudes constituted a veritable cultural takeover, impacting tastemakers for generations to come.
What makes a person hip? It certainly doesnâ€™t hurt to look like Paul Newman, represented here in a 1956 photo taken while he was playing hard-scrabble criminal-turnedÂ­boxer Rocky Graziano in Somebody Up There Likes Me. A cigarette dangles haphazardly from the actorâ€™s smirking lips, and his heavy coatâ€™s upturned collar frames the preternaturally handsome features of his face. Strolling down a busy city street, Newman looks unfettered and indifferent: consummately carefree and hopelessly, heartbreakingly cool.
In many ways, James Dean still sets the gold standard for cool. Who cares if a rebel has a cause or not when he looks that good in blue jeans and a white T-shirt? Richard Millerâ€™s 1955 snap of the actor feels both intimate and fantastically detached. Heâ€™s leaning against a gleaming hot rod to light a cigarette, his famous hair is thick and tousled, his eyes shaded by aviator sunglasses. Dean wears a snap-buttoned cowboy shirt tucked into his jeans, and though the photoâ€™s caption indicates that it was taken on the set of the epic nouveau-Western Giant, the viewer can easily imagine that this is James Dean being James Dean, on set or off: ethereally, effortlessly, impossibly cool.
We might think of cool as shorthand for rebellion, whether conferred or assumed. Fittingly then, leather, cigarettes, and copious amounts of sex appeal figure prominently in this exhibition. Steve McQueen is emblematic of mid-century cool, a status heartily bolstered by several photos on display. John Dominisâ€™s 1963 shot of McQueen presents him as equal parts actor and sex symbol. His right arm reaches upward into the sleeve of his leather bomber jacket. His hair is wet, slicked to his forehead with sweat, and if we look closelyâ€”donâ€™t blush, dear readerâ€”we can see the undone top button of his dungarees.
It makes sense that a standout of the show, a picture of Frank Sinatra, comes from the great photographer Sid Avery. One of the only color snapshots on view, it depicts the most famous crooner of all time in a moment of meditative repose, handsomely garbed in a light gray suit with matching fedora. His head is cocked thoughtfully upward and his arms are crossed closely against his chest. Itâ€™s a photo that flawlessly shows us what we already know: that for some people, cool isnâ€™t a feeling or even a mood, but a complete persona.
With the exception of a smattering of shots of Edie Sedgwick and Jane Fonda, thereâ€™s a paucity of hip ladies in When Cool Was King. Nevertheless, the exhibit is a fingerÂ­snappingly swell good time. Images taken over half a century ago look hipper than ever, proving that true glamour never really goes out of style.