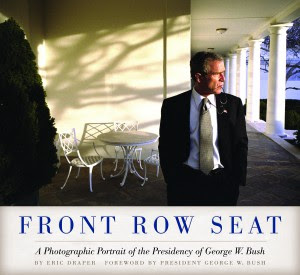 Via The Bob Clark Show on KKOB

Eric Draper of Rio Rancho, who was the official White House Photographer for President G.W. Bush, is on our show next Thursday, June 27th, at 9 AM (Moutain Time). He will be discussing his new book, Front Row Seat. (Link to listen live here)


The new book by the University of Texas Press, “Front Row Seat: A Photographic Portrait of the Presidency of George W. Bush,” presents an extraordinary collection of images, many never before published, by former Chief White House Photographer Eric Draper. Part of the Focus on American History Series with The University of Texas at Austin’s Dolph Briscoe Center for American History, “Front Row Seat” offers a compelling, behind-the-scenes view of the entire presidency of George W. Bush, from dramatic events to relaxed, intimate moments within the Bush family.

The book’s publication this spring coincided with the opening of the new George W. Bush Presidential Library and Museum on the campus of Southern Methodist University in Dallas, Texas, on May 1.

America’s 43rd president George W. Bush presided over eight of the most dramatic years in recent history, from the 9/11 attacks early in his administration to the worldwide economic crisis of 2008. By his side, recording every event, was his personal White House photographer, Eric Draper. From a collection of nearly 1 million photographs, Draper has selected more than 100 images of Bush that portray both the public figure and the private man.

Through Draper’s lens, we follow the president through moments of crisis that called for strong leadership, such as 9/11; emotional meetings with troops in war zones, wounded soldiers at home and Katrina survivors; and happy, relaxed times.