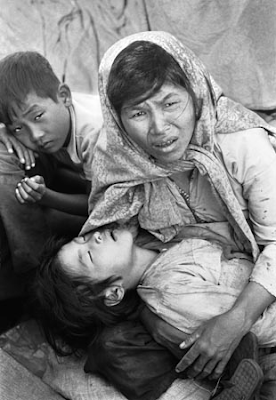 THE BOAT OF NO SMILES
Here’s my story: in early 1977 I noticed a couple of paragraphs in the New York Times about people escaping from Vietnam. Associated Press had just signed me up with carte blanche to cover the whole world, and complete editorial control. (The first person before or since to get it–that was the deal I made with them.) And I went to the president and said, "Boat people. Here’s a story I want to do," and started making calls all through Southeast Asia to AP bureaus to find out more. No one, no country, was letting the refugees land. You couldn’t even find out about them. At first, I went back and said the story was impossible to cover. Then I had an idea and got in touch with the Thai Marine police (I knew Thailand very well) who had been shoving the boats right back offshore to certain death. I told them would like to go with them on patrol in the Gulf of Siam. They OK’d it, so we headed for the most likely point in northern Thailand, getting there at 4am when a refugee boat had just pulled in; the Thai authorities were getting ready to cast it off again. It was Thanksgiving Day in 1977. I suddenly asked the Vietnamese if I could go with them— I bought gas and rice – they had no fuel or food. There were forty-nine people aboard that fishing boat, including children— in the hold that same day a baby was born. The Thais towed us back out to sea and set us adrift. On that boat, there was no room to lie down, so they all had to sit up straight, waking or sleeping. I cannot describe the despair. There were dramatic pictures of mothers with half-dead children in their arms but something even worse was there. Whenever you go to refugee camps in a war zone where terrible things have happened, where bodies might be stacked up, and disease everywhere, you still find children who gather before the camera with a smile. This was the first time in my life that no child smiled. I called the pictures, "the boat of no smiles." The boat was hardly moving- they didn’t even know where to go. Then we were approached by another Thai boat with a megaphone ordering me off at gunpoint— they were afraid someone would let them dock knowing there was an American aboard. I had mixed feelings about getting off. I wrote the story and sent the pictures immediately, and they ran. Peter Arnett did a story also and a few others. Within a couple of days the administration asked the AP to present the photos to Congress. And Carter said let them come to America. The Congress had been thinking about it, sure, but the pictures did it, pushed it over. To me that was the only thing I ever done that I cared about, valued. Pictures do work, at least sometimes. They carry conviction. Go back to the pictures in Speak Truth to Power and you can look at them in another way. These people, those faces, are the person next door. These are real people, and the pictures prove that no one made this up– they are the evidence that they exist. Ordinary people, doing extraordinary things.  --Eddie Adams
Related: Forthcoming Exhibition -
People Get Rady: The Struggle For Human Rights
July 6 - September 23, 2012