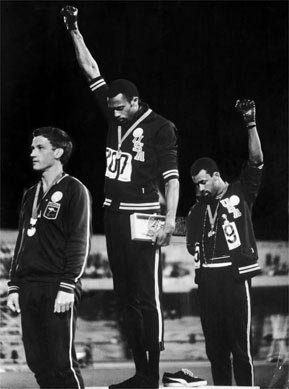 <>Smith and Carlos, the 200m gold and bronze medallists, don black gloves and give the Black Power salute on the podium in Mexico in 1968 Photo by John Dominis ©Time Inc.

The Guardian has been publishing a series of memorable Olympic moments as a lead up to the 2012 London Olympics.

"On 17 October 2005 a 20ft-high statue was unveiled at San Jose State University showing their former students Tommie Smith and John Carlos frozen, fists aloft, as they had stood exactly 37 years earlier on the Olympic podium in Mexico City. "Tommie Smith and John Carlos stood for justice, dignity, equality and peace," reads the inscription. "Hereby the university and associated students commemorate their legacy."
Two years later Smith published his autobiography. In 2008 the pair were given the Arthur Ashe Courage Award at the ESPYs, something akin to an American Sports Personality of the Year awards. Carlos's own autobiography followed last October. This, now, is their life, full of speaking engagements and interviews, publicity and publication, applause and acclaim.

In the moments before the medal ceremony in Mexico City, Carlos, Smith – as of a few moments earlier the 200 metres world record-holder – and the Australian silver-medallist Peter Norman sat in a room the athletes called "the dungeon", deep in the bowels of the Olympic Stadium. As they prepared, they discussed what was about to happen. One of the things mentioned was the possibility of them being murdered on the spot.

"I remember telling Mr Smith: 'Remember when we get out there, we've been trained as runners to listen to the gun,'" Carlos has said. "'So when we get out there and do what we do, if the hammer hits that bullet, hit the deck. Don't be just a duck on the table for them to just shoot at.'"