On Exhibit: Grey Villet's Photographs of The Lovings 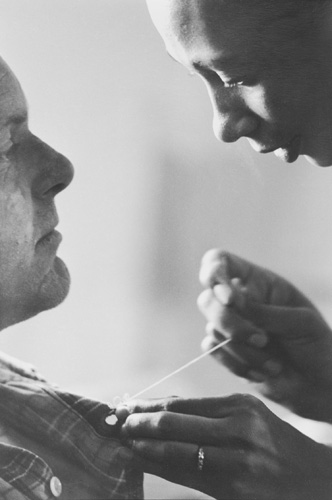 Concurrent with the opening of Vivian Maier: Discovered, we are pleased to exhibit selected photographs Grey Villet shot of the Richard and Mildred Loving for Life magazine in 1965. "Grey Villet: The Lovings" will continue through March 18, 2012.

Grey Villet took over 2,400 frames of the Lovings for Life in 1965 but the magazine did not run the story until March 18, 1966, when the Virginia Supreme Court of Appeals upheld the lower court ruling and the Lovings’ case headed to the U.S. Supreme Court. The tone of the piece, as well as the selected images, was cool and neutral; the three published images that include both Mildred and Richard are extremely chaste and do not capture the emotional bond between them as so many of Villet’s other images do. Life, like many other media outlets, did not want to address the topic of interracial sex directly for fear of offending popular opinion.

The Loving Story, a documentary film, tells the story of Richard and Mildred Loving to examine the drama, the history, and the current state of interracial marriage and tolerance in the United States. It's World Premiere was at the Full Frame Documentary Film Festival in April 2011, and the On-air premiere of The Loving Story will be on HBO, February 14, Valentine’s Day, 2012.

A selection of Grey Villet's photographs, including several of The Lovings, will also be on exhibit during the AIPAD Photography Show in New York March 28 - April 1, at Monroe Gallery Booth #419.

NPR: The Loving War: How Black History Is Both Black And White