71 YEARS AGO: GONE WITH THE WIND OPENS 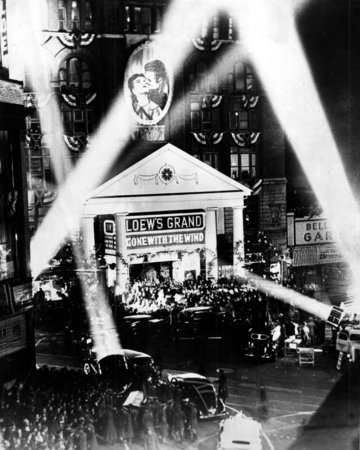 On December 15, 1939, "Gone With The Wind" premiered in Atlanta, Georgia.
Gone With The Wind  is often considered the most beloved, enduring and popular film of all time. Sidney Howard's script was derived from Margaret Mitchell's first and only published, best-selling Civil War and Reconstruction Period novel of 1,037 pages that first appeared in 1936, but was mostly written in the late 1920s. Producer David O. Selznick had acquired the film rights to Mitchell's novel in July, 1936 for $50,000 - a record amount at the time to an unknown author for her first novel, causing some to label the film "Selznick's Folly." At the time of the film's release, the fictional book had surpassed 1.5 million copies sold. More records were set when the film was first aired on television in two parts in late 1976, and controversy arose when it was restored and released theatrically in 1998.

The famous film, shot in three-strip Technicolor, is cinema's greatest, star-studded, historical epic film of the Old South during wartime that boasts an immortal cast in a timeless, classic tale of a love-hate romance. The indomitable heroine, Scarlett O'Hara, struggles to find love during the chaotic Civil War years and afterwards, and ultimately must seek refuge for herself and her family back at the beloved plantation Tara. There, she takes charge, defends it against Union soldiers, carpetbaggers, and starvation itself. She finally marries her worldly admirer Rhett Butler, but her apathy toward him in their marriage dooms their battling relationship, and she again returns to Tara to find consolation - indomitable.

Authenticity is enhanced by the costuming, sets, and variations on Stephen Foster songs and other excerpts from Civil War martial airs. Its opening, only a few months after WWII began in Europe, helped American audiences to identify with the war story and its theme of survival.

With three years advance publicity and Hollywood myth-making, three and one-half hours running time (with one intermission), a gala premiere in Atlanta on December 15, 1939, highest-grossing film status (eventually reaching $200 million), and Max Steiner's sweeping musical score, the exquisitely-photographed, Technicolor film was a blockbuster in its own time. A budgeted investment of over $4 million in production costs was required - an enormous, record-breaking sum. The film (originally rough-cut at 6 hours in length) was challenging in its making, due to its controversial subject matter (including rape, drunkenness, moral dissipation and adultery) and its epic qualities, with more than 50 speaking roles and 2,400 extras

Inquire about the Gone With The Wind Premiere photograph

Tags: Gone with the wind techicolor