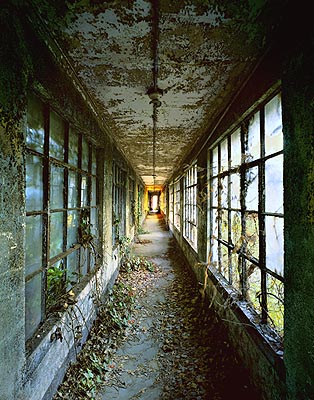 Stephen Wilkes: Corridor #9, Island 2, Ellis Island
Back in April, we wrote about an article by Robin Pogrebin in The New York Times reporting that "Save Ellis Island, a nonprofit charged with restoring that historic immigrant gateway to America, may not be able to save itself. The group has run out of money." There was an urgent appeal: Funds Sought to Continue Restoration at Ellis Island; abandoned buildings on the southern side of Ellis Island immortalized in Stephen Wilkes' photographs.


On the brink of extinction last spring, the nonprofit organization charged with restoring Ellis Island will benefit from a $100,000 gift from American Express, the credit card company is to announce on Thursday.

"It’s an enormous boost,” said Judith R. McAlpin, the president of the organization, Save Ellis Island. “American Express has long been associated with the very best in historic preservation. It’s like the Good Housekeeping seal of approval.”

The donation, the company said, was prompted by an article in The New York Times about how Save Ellis Island was struggling to continue the restoration of 29 buildings on the 27.5 acre historic immigrant gateway to America. “We’re trying to help them help themselves so they’re able to raise more money not just for the restoration of the buildings — they need general operating support,” Timothy J. McClimon, president of the American Express Foundation, said. “People are in love with the buildings, they’re passionate about the buildings — that’s kind of the easy money. But how do you sustain yourself as an organization?”

What Save Ellis Island needs most, Mr. McClimon said, is to build its fund-raising capacity by strengthening its board and development staff. As a result, American Express will make its donation through the National Trust for Historic Preservation, which will provide expertise. The trust included Ellis Island on its list of America’s 11 Most Endangered Historic Places twice in the 1990s.

Mr. McClimon left open the possibility that American Express might contribute more in the future. “We’re very positive about Save Ellis Island,” he said. “We think they have great potential.”