"a celebration of the LIFE magazine photographer who famously shadowed an unknown act in the US on February 1964, The Beatles" 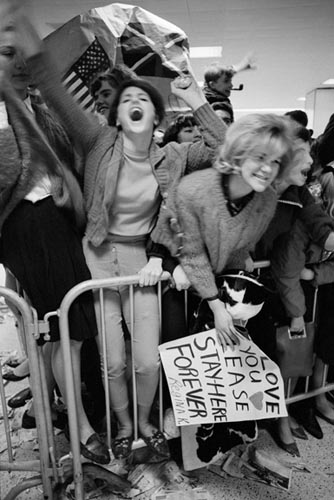 “Ladies and Gentlemen The Beatles!”

The Santa Fe Reporter
April 22, 2014
By Enrique Limón
Hot off the heels of When Cool Was King, Monroe Gallery of Photography unveils their latest, Bill Eppridge: 1964, a celebration of the LIFE magazine photographer who famously shadowed an unknown act in the US on February 1964, The Beatles.
Eppridge was at John F Kennedy airport on assignment for the mag. After consulting with John Lennon, Ringo Starr gave the OK to Eppridge to shadow the group for the next few days and exposed American masses to the British sensation.
“Bill never set pictures up; he liked to find pictures and make pictures that way,” Eppridge’s widow Adrienne Aurichio tells SFR.
Eppridge’s assignment was just to capture the Fab Four’s arrival. “But nobody expected what happened out there,” she says of the group of rabid fans, some 3,000 strong.
“Bill was somebody who actually did a lot of photo essays,” Aurichio continues. “He liked to do stories in-depth, which is why he stayed with The Beatles for six days.”
The photographer’s gumption paid off and resulted in iconic shots like the group hanging out inside their room at the Plaza Hotel, practicing for their career-making debut on The Ed Sullivan Show and later performing at Carnegie Hall.
Those shots are now immortalized in the book The Beatles: Six Days that Changed the World, which Aurichio edited before her husband’s untimely death in October of last year.
Aurichio presents and signs the book at the art opening this Friday.
“When he saw things happening, he would just follow the story,” she says of her late husband’s approach. “He would try and tell the story as if he were describing it to you and you as a writer would write it. He wanted to show you the story in his pictures, so he would methodically go about it.”
Bill Eppridge: 1964
5-7 pm Friday, April 25
Monroe Gallery of Photography
112 Don Gaspar Ave.,
992-08