A Photographer's War With PTSD 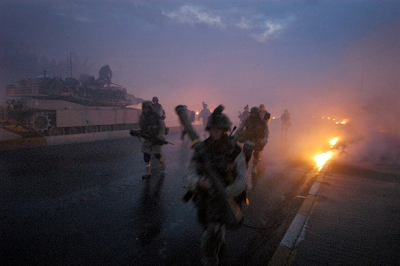 Marines run for cover after white phosphorus was accidentally fired at them by another company in Falluja, Iraq on November 9, 2004. [Ashley Gilbertson / VII]

Recomended read, via The Atlantic:

"As Ashley Gilbertson crept up the dark staircase of a minaret in Fallujah, he hovered closely behind advance troops of the United States Marines. Stepping around and over the rubble created by an earlier shelling of the mosque, Gilbertson could hardly see the two soldiers in lead.

Moments before starting their climb, Gilbertson argued to be the first person in the room. He wanted to take first shot at the insurgent who used this holy perch to prey on advancing U.S. forces. However, Lance Corporal William Miller and his partner, Lance Corporal Christian Dominguez, would not back down, and they took the lead that November afternoon. As Gilbertson took to the stairs, his partner Dexter Filkins mounted the steps behind him.

Guns at the ready, the convoy had just crested the first flight of crumbling stairs when gunfire erupted. Gilbertson was pushed backwards, tumbling down the steps. His face felt wet.

It was the blood of Lance Corporal Miller.

As the scene became chaotic, Gilbertson's immediate reaction was to shoot back.

And it wouldn't matter.

The only weapon Gilbertson carries is a camera.