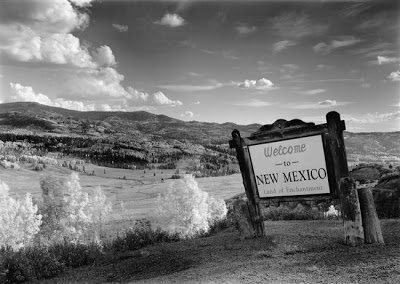 This photo titled “Welcome to New Mexico” was made near Chama. (CRAIG VARDJABEDIAN FROM ‘LANDSCAPE DREAMS, A NEW MEXICO PORTRAIT’)

Review: Captivating panorama
Via The Albuquerque Journal
By David Steinberg / Journal Staff Writeron Sun, Dec 16, 2012
Which one to choose for publication? A San Marcos cowboy holding a saddle with his canine friend Buddy next to him? A roadside descanso in Mora? Quaking aspen in Red River? Chile fields near Hatch?
I reviewed and re-reviewed the many wondrous black-and-white images of Santa Fe photographer Craig Varjabedian in his new book “Landscape Dreams” before deciding on the accompanying one you see.

I was taken by the tilt and the architecture of the “Welcome to New Mexico, Chama, New Mexico” sign. How 1950s New Mexico it was. I was also enraptured by the shimmering cool leaves, the curving vale, the stand of trees in the middle ground, the upward slope of the hill to the sky.

As the first full-page photograph in the book, it welcomes the reader to a journey – a journey into Varjabedian’s work – into a thoughtful essay on the Land of Enchantment, into an explanation of the photographer’s themes and artistic philosophy and into the how and why of his own coming to New Mexico.

I asked Varjabedian about the “Welcome to New Mexico” photograph.

“The sign is a kind of metaphor for New Mexico,” Varjabedian said. “As real and truthful as it looks, it is not really truthful. Ultimately what I am trying to say is that I’ve been calling this book my love letter to New Mexico. Whatever tools, tricks I can use as a photographer, I use. The sign was shot up. There were holes in it.”

The fact that the sign is a bit off-kilter, Varjabedian commented, says that there’s something “wonderfully different” about New Mexico.

He took the photograph in 2010. Since then, he said, the state Highway Department has replaced the sign with one that is more vertical.

“It’s a new sign and it doesn’t have the quality of its older relative,” he said.

“There’s something magical, enchanted and turned a little different about this place, which brings it its charm … and delights me to want to photograph it. I’m struck by those things that are turned a little bit differently, whether a sign or some historical fact,” he said.”

On the facing page of the “Welcome” sign is part of historian Hampton Sides’ foreword. In it, Sides touches on New Mexico’s road to statehood. The state “worked its way into the national consciousness,” he wrote, “and, as it nearly always does, won people over.” It was a reference to a welcoming act on Jan. 6, 1912 – membership into the Union as the 47th state.

Varjabedian’s public love letter was published in the same year as the New Mexico Centennial.

An exhibit of images from the book is up through Dec. 31 at William Talbot Fine Art, 129 W. San Francisco St., Santa Fe.

David Steinberg is the Journal’s Books editor and an Arts writer.

This is the cover of the book “Landscape Dreams: A New Mexico Portrait” (courtesy of unm press website)