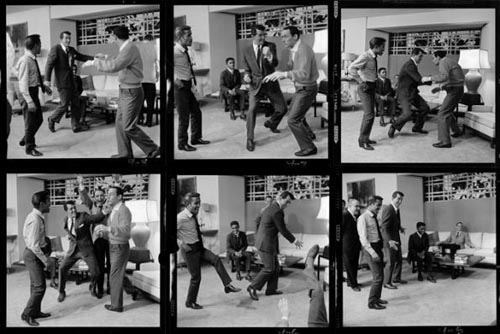 Santa Fe--Monroe Gallery of Photography, 112 Don Gaspar, is pleased to present “When Cool Was King”, an exhibition featuring photographs from a time when cool reigned supreme. The exhibition opens with a public reception on Valentine's Day, Friday, February 14, from 5 - 7, and continues through April 20.

In their book "COOL: An Anatomy of an Attitude", Dick Pountain and David Robins ask "So what exactly is Cool? That is a difficult question to answer. Is it a philosophy, a sensibility, a religion, an ideology, a personality type, a behavior pattern, an attitude, a worldview?" The exhibition does not attempt to answer that question, but simply accepts Cool as a phenomenon that we can recognize when we see it.

Concurrently, an exhibition at The National Portrait Gallery, "American Cool", asks: "What do we mean when we say someone is cool? Cool carries a social charge of rebellious self-expression, charisma, edge and mystery."

The exhibition featuring portraits of iconic figures of Cool, such as: Steve McQueen, James Dean, Andy Warhol, the Rat Pack, 1960's-era Rolling Stones, the Beatles, Marianne Faithful, Nico and the Velvet Underground, Elvis Presley, each of whom has contributed an original artistic vision to American culture symbolic of a particular historical moment.