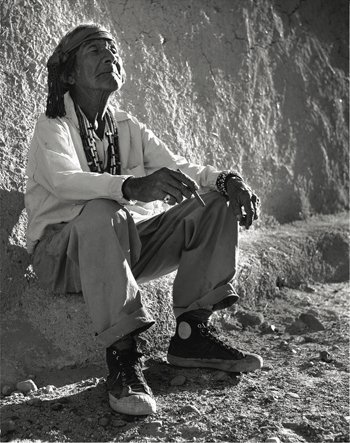 Already a Print Subscriber? None of these apply to you?Back
“The contemporary Native American photography in this exhibition explores, reclaims and recontextualizes historic Native American portraiture,” said the exhibit’s curator, Diane Bird. “They raise issues of colonialism, subjugation, spirit loss, blasphemy, identity and pseudo-cultural appropriation, as well as questions of veracity, historical fact and interpretation.”
The exhibit includes 75 photos, which is 10 more images than the original installation, said Steve Cantrell, a spokesman for the New Mexico Department of Cultural Affairs.
Some of the images are self-portraits, while others portray the photographers’ family members, Cantrell said. Native American photographers such as Lee Marmon of Laguna Pueblo and William Wilson from the Navajo Nation photographed some of the added images in the show.
Among the historical images is a late-1800s tintype, taken by an unknown photographer, that portrays a member of the Chippewa tribe. The artwork is accompanied by a letter about the Chippewa Indian and the person’s family. The Chippewa tribe is in Minnesota.
“There are rare, unique vintage photos,” Daniel Kosharek, a photo archivist at the Palace of the Governors, said in a news release. “Very seldom do you see them displayed, not at the Smithsonian, or anywhere, and it’s very much a treat to see them here all in one place.”
During the opening day, organizers encourage patrons to bring a vintage heirloom photo to be scanned and included as part of a display in a community photo gallery at the museum, which will be part of a presentation by Marmon. Also, as part of the opening, American Indian dancers will perform.

If you go
What: Photo exhibit titled Native American Portraits: Points of Inquiry
Where: Museum of Indian Arts and Culture,
710 Camino Lejo
When: Opening from 1 to 4 p.m. Sunday, Feb. 16
Cost: Free for New Mexico residents, others by museum admission.
Contact Uriel J. Garcia at 986-3062 or ugarcia@sfnewmexican.com. Follow him on Twitter at @ujohnnyg.