NEW YORK - Sunday marks the 50th anniversary of the last shows performed at the legendary Fillmore East music hall where the likes of The Grateful Dead and the Beach Boys once played.

The Fillmore is now a bank but its heyday- as a prime music venue- is remembered by resident photographer Amalie Rothschild.

I was a fly on the wall," said Rothschild. "I really didn’t want to be hit on. I wasn’t looking to hook up and my cameras were shields. I was serious. I was an artist. A photographer. I didn’t have the kind of confidence as a young woman yet, but I had the right mentality."

During its’ brief but legendary three-year run from 1968 – 1971, the roughly 2,600 seat Fillmore East in the East Village played host to a who’s who of legendary performers. Elton John, Crosby, Stills, Nash and Young, The Who, and the Allman Brothers just to name a few.

Rothschild was, in essence, the venue’s house photographer.

"And the first tickets to sell out were the last four rows in the balcony, in the top of the balcony," added Rothschild.

Rothschild, who has enjoyed a long successful career as a photographer and filmmaker, captured some of her most famous photos during a Thanksgiving Day Rolling Stones Show in 1969 at Madison Square Garden. Ike and Tina Turner opened and Janis Joplin made an unexpected cameo onstage. 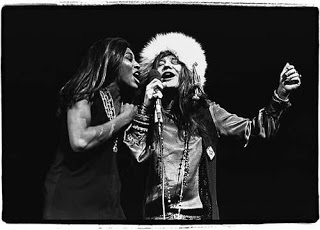 "Before they went on, Janis was just standing at the side of the stage with a few friends and right as I pulled the shutter I saw someone walk into the frame and when I developed the film and developed the contact sheet, I went ‘oh" because the person who walked in was Jimi Hendrix," said Rothschild.

Historical in more ways than one. Once bands like the Rolling Stones made their leap to arenas, making more money playing fewer shows to bigger audiences, the days of smaller theaters like the Fillmore were numbered.

In April of 1971, promoter Bill Graham announced he was shutting the venue.

"No one had any clue. It was a terrible shock for the staff to take in. He could’ve kept it going for a few more years but it wouldn’t be the same," said Rothschild.

The final show was a sendoff for the ages. A June 27 1971 all-night show headlined by the house favorites, the Allman Brothers.

"As you know no one wanted it to end.. and one of my favorite pictures of the Beach Boys is that I was able to catch all of them onstage with Bill Graham behind a speaker column watching them onstage.... it went until dawn and we walked out and the sun was out and everybody was crying and we went to Ratner’s for breakfast and it was a real tear-jerker and real difficult.'