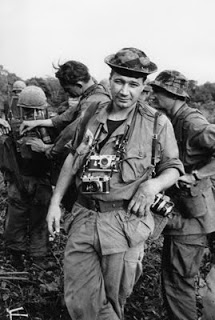 September 18, 2009
AUSTIN, Texas – The photographic archive of renowned photojournalist Eddie Adams has been donated by his widow, Alyssa Adams, to the Dolph Briscoe Center for American History at The University of Texas at Austin.
The archive documents Adams's career and includes "Saigon Execution," his Pulitzer Prize-winning photograph of General Loan executing a Vietnamese prisoner in 1968. "Saigon Execution" is widely considered to be one of the most influential photographs taken during the Vietnam war.
"Eddie Adams was a photojournalist of immense talent," said William Powers Jr., president of the university. "His collection gives the university another invaluable resource to advance our understanding of 20th century American history and photojournalism. We are grateful to Alyssa Adams for this gift of such power and significance."
"The Eddie Adams Photographic Archive is one of the most important collection gifts ever made to the Briscoe Center, said Dr. Don Carleton, executive director of the Briscoe Center. "It is a monumental addition to the photojournalism component of our news media archive. Adams was a hugely influential photographer and journalist, whose body of work would be remarkable for its visual impact alone. But more important, his work had the power to shape the course of history. I cannot overstate the degree to which this donation enhances our already impressive photographic and news media holdings."
Adams began his photography career as a high school student in Kensington, Pa. He was a Marine combat photographer during the Korean War, and in 1962, he joined the Associated Press (AP). After 10 years, Adams left the AP for Time magazine and freelance work. In 1976, he rejoined the AP as the first and only photographer to hold the title of special correspondent. From 1980 until his death in 2004, he was a photographer for Parade magazine, which featured more than 350 of his photos on its covers.
While he was on assignment for the AP, Adams carried his camera through 150 operations in Vietnam. He also covered wars in Israel, Jordan, Egypt, Turkey, Cyprus, Portugal, Ireland, Lebanon, and Kuwait. "Boat of No Smiles," his series on the Vietnamese boat people, influenced the United States to admit 200,000 Vietnamese refugees at the end of the war.
"It was important that Eddie's legacy be preserved by an educational institution, one that collects photojournalism for teaching and research," said Alyssa Adams. "He was such an important mentor and colleague to the community of photojournalists, so it's particularly fitting that his work will be in the same institution that holds the archives of his peers."
Measuring 200 linear feet in size, the Eddie Adams Photographic Archive includes slides, negatives, prints, audio and video materials, news stories, diaries, notes and tear sheets. In addition to substantive coverage of the Vietnam War, the collection includes his in-depth features on poverty in America, the homeless, Mother Teresa, Brazil, alternative society, anti-war demonstrations, and riots. The collection also includes his intimate portraits of such high-profile figures as Ronald Reagan, Fidel Castro, Malcolm X, Clint Eastwood, Bette Davis, Bill Cosby, and Jerry Lewis.
Adams was awarded more than 500 photojournalism awards during his lifetime, including the George Polk Award for News Photography in 1968, 1977 and 1978, the Robert Capa Gold Medal in 1977 and numerous awards from such organizations as World Press Photo, the National Press Photographers Association, Sigma Delta Chi, and the Overseas Press Club.
The Adams collection joins the archives of a number of his colleagues already held at the Briscoe Center, including David Hume Kennerly, Dirck Halstead, Wally McNamee, Diana Walker, Dick Swanson, Flip Schulke, and Cynthia Johnson.
In conjunction with the announcement of the donation of the Adams collection, the Briscoe Center will host an exhibit of his photographs at its Sid Richardson Hall location. For details on the exhibit, which closes Jan. 16, 2010, please visit the Briscoe Center's Web site. The Briscoe Center will also host a screening of a documentary that examines Adams's life, on Oct. 28 at the Blanton Museum of Art. The screening is free and open to the public, and will be followed by remarks from Alyssa Adams and Eddie Adams's professional colleague David Hume Kennerly. Details on the event will be available shortly.
Monroe Gallery of Photography is honored to represent Eddie Adams' photographs.
112 Don Gaspar
Santa Fe, NM 87501
505.992.0800
505.992.0810 (fax)
info@monroegallery.com
www.monroegallery.com
‹ PREVIOUS   |   NEXT ›