BILL EPPRIDGE AND ALYSSA ADAMS TO APPEAR ON "MORNING JOE" 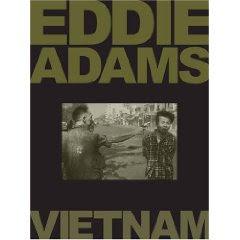 Renowned photographer Bill Eppridge will join Alyssa Adams, wife of the late Eddie Adams, on the MSNBC program "Morning Joe" on a date to be announced shortly.. They will be discussing the new book, "Eddie Adams: Vietnam", authored by Alyssa Adams and containg astonishing never-beforeâ€“seen pictures, articles, pages from journals, and other of Eddie Adams' artifacts.
Bill Eppridge's assignments were as varied, exhilarating and tumultuous as the times themselves. With well over 100 assignments, Eppridge had already proved his talent by the time he was formally made a member of the exalted Life Magazine staff in 1964. He was assigned to cover the New York airport greeting of The Beatles, amidst the hustle and bustle of the working press. He was determined to occupy the perfect camera angle, and found another photographer looking for the same vantage point: Eddie Adams, on assignment for the Associated Press. It was Bill and Eddie's first meeting, and the beginning of a life-long friendship.
Their paths crossed again in Vietnam. Eppridge returned to America to cover Robert Kennedy's 1966 campaign for Senate, and his 1968 Presidential Campaign. Soon after Kennedy's victory speech at the Ambassador Hotel, he heard eight gunshotsâ€”â€œthe sound I will never forgetâ€â€”and snapped the grim final images of Kennedy, bleeding in the arms of a stunned busboy.
Bill Eppridge is one of the most accomplished photojournalists of the Twentieth Century and has captured some of the most significant moments of that time: the civil rights movement, including the Neshoba murders in Mississippi; Woodstock; and assignments for National Geographic, People, and Sports Illustrated.
"Eddie Adams: Vietnam" is the first book by one of the worldâ€™s legendary photojournalists, Eddie Adams, is along-awaited landmark. Adamsâ€™1968 Pulitzer Prize-winning photograph cemented his reputation in the public eye and stands forever as an icon for the brutality of our last century: the image of Nguyen Ngoc Loan, police chief of Saigon, firing a bullet at the head of a Vietcong prisoner. Adamâ€™s image fueled antiwar sentiment that ultimately changed the course of history.
Monroe Gallery is honored to represent Bill Eppridge's and Eddie Adams' photography. Stay tuned to our blog for the announcement of the day and time of their appearance.
‹ PREVIOUS   |   NEXT ›