BILL EPPRIDGE AND THE BEATLES 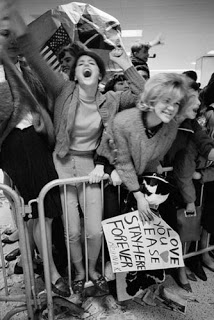 The Beatles formed in April, 1960; and the band split up on April 10, 1970. 2010 will be the respective 50th and 40th anniversaries of the seminal dates in Beatles history.
Two hundred six songs. Thirteen original albums plus two CDs worth of miscellany. Seven years in the making - the complete recorded works of the Beatles rolled out on September 8.
Renowned photojournalist Bill Eppridge was there at the beginning.
Bill Eppridge was on assignment for LIFE magazine, not yet on staff, but a regular photographer in 1964. He didn't really know who The Beatles were, nor did most of America "One morning my boss said, 'Look, we've got a bunch of British musicians coming into town. They're called the Beatles.'"
Bill Eppridge was at John F. Kennedy airport on February 7, 1964 awaiting the arrival of The Beatles. He continued to photograph The Beatles that day, and over the next several days. He was invited to come up to their room at the Plaza Hotel and "stick with them." He was with them in Central Park and at the Ed Sullivan Show for both the rehearsal and the historic performance. He rode the train to Washington, D.C. with them for the concert at the Washington Coliseum, and photographed their Carnegie Hall performance on February 12, 1964.
"These were four very fine young gentlemen, and great fun to be around," Eppridge recalls. After he introduced himself to Ringo, who consulted with John, the group asked what he wanted them to do while being photographed for Life. "I'm not going to ask you to do a thing," was Eppridge's reply. "I just want to be there." An exhibit of Eppridge's Beatles photographs has been touring since 2001, and was seen by over 2 million people at the Smithsonian Museum.
See Bill Eppridge's photographs of the Beatles here.