"Breaking Bad's" creator, Vince Gilligan, talks about shooting the show in New Mexico, and exploring sights in the state 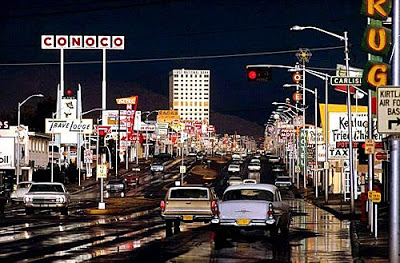 
"And in Albuquerque itself, whatâ€™s of interest?
Iâ€™ll admit that when you enter the city on either Interstate, 40 or 25 â€” they meet smack in the middle â€” Albuquerque doesnâ€™t look, shall we say, particularly picturesque. It seems like lots of strip malls and chain restaurants. But it has a stealth charm. Once you get into the neighborhoods, you realize it possesses a great amount of culture and history and natural beauty surrounding it.
Central Avenue is a great drive. A part of Route 66, itâ€™s still dotted with old neon motel signs like that great Ernst Haas photo. Thereâ€™s a great art gallery called Mariposa Gallery and a restaurant we love called Zinc.
The Sandias, the mountains to the east, are omnipresent. Take the cable car up to a restaurant called High Finance, which is a good place to eat. Itâ€™s stark beauty up there; you can see for hundreds of miles."