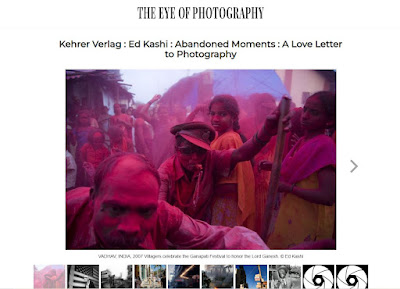 Via The Eye of Photography
January 18, 2022
For forty years, celebrated photojournalist Ed Kashi has delivered the worldâ€™s stories through images that both imply, as well as directly show, humanistic challenges and joys. Abandoned Moments: A Love Letter to Photography (Kehrer Verlag, March 2022) is a window into Kashiâ€™s unique voice and craft, and presents glimpses of ordinary life, as well as extraordinary events, struggles, and triumphs.
A tenet of journalism is to remove oneâ€™s own voice, as much as is possible, from the narrative. But a photographerâ€™s impulses are also inextricably linked to and driven by who they are. This cues how they see, what they notice, and how they compose. The bookâ€™s publisher notes, â€œWhen geometry, mood, and possibility unite to unintentionally create something new, the magical and fictional qualities of still photography capture the unplanned essence of existence. In contrast to his journalistic approach of deep personal connection and keen observation, this work is about capturing the untamed energy of a moment with abandon.â€
In the essay she contributed for this book, â€œOn Recollection,â€ photography scholar and curator Alison NordstrÃ¶m reflects on this intersection between the intentional and unplanned elements within Kashiâ€™s work.
â€œBy returning to his archive, long after the images have lost their primary relevance and immediate use, he re-inserts his voice, heart, and intellect into a world of pictures from which he had once intentionally concealed his presence.â€
In NordstrÃ¶mâ€™s consideration of how the book is structured and curated, she points out that in part this book is a reflection of the place Kashi is at in his career. â€œRecalled, reconsidered, and recontextualized, these images serve as a point of departure for the photographerâ€™s retrospective meditations on his work.â€
Kashi shares that this book is a 40-year â€œlabor of love.â€ He speaks to the evolution of his style and methodology, revealing that, â€œOver time, I developed a more personal approach, one that is instinctive and without premeditation. I often shoot from the hip. Sometimes it is simply a matter of letting my camera absorb light in hopes that the intensity and immediacy of life-simply-being-lived has been devoured in all its fullness. It is precisely the uncontrolled circumstances sparking these images that gives them their vitality and surprise.â€
The images selected span the decades of his work and were taken around the world. Kashi speaks to the â€˜abandoned momentâ€™ theme cued by the title, stating that, â€œAbandoned moments demonstrate a different kind of precision. They are shaped by serendipity and instinct, rather than objectivity and intellect. They are free to be less controlled but for that very reason they may be more certain and more certainly trueâ€¦â€
Ed Kashi is a renowned photojournalist, filmmaker, speaker, and educator who has been making images and telling stories for 40 years. As a member of VII Photo Agency, Kashi has been recognized for his complex imagery and its compelling rendering of the human condition. Along with numerous awards from World Press Photo, POYi, CommArts and American Photography, Kashiâ€™s images have been published and exhibited worldwide. His editorial assignments and personal projects have generated nine books. Kashi in partnership with his wife, writer and filmmaker Julie Winokur, founded Talking Eyes Media. The non-profit company has produced numerous award-winning short films, exhibits, books, and multimedia pieces that explore significant social issues.
Alison NordstrÃ¶m is an independent scholar, specializing in photographs of all kinds. She is known for her writing, speaking, and curating and for the administration of photographic projects both in the US and internationally. Her long career in the field includes positions as Founding Director and Senior Curator of the Southeast Museum of Photography (FL), and Senior Curator of Photographs, Director of Exhibitions at George Eastman House (NY). In 2011, NordstrÃ¶m received the Focus Award for Lifetime Achievement in Photography from the Griffin Museum in Boston and the Apple Valley Foundation Award for Curatorial Excellence. She is currently a Research Associate in Photography at Harvard University.
â€œPerhaps most importantly, this book demonstrates an innovative and nuanced form for autobiography from someone whose entire working life has been predicated on his own invisibility. By offering the story of his life in this way, this thoughtful man has risen above some of the restrictions his chosen career has imposed.â€â€”Alison NordstrÃ¶m
Kehrer Verlag : Ed Kashi : Abandoned Moments : A Love Letter to Photography
Photographs by Ed Kashi
Texts by Ed Kashi and Alison NordstrÃ¶m
Hardcover
42 color and 26 b/w illustrations
12 x 0.5 x 9.75 inches
ISBN: 3969000440
Price: $58 US, â‚¬45.00, Â£40
Order here
A book signing event will be held at Monroe Gallery of Photography at a date to be announced.