Via Rochester Institute of Technology
January 14, 2022 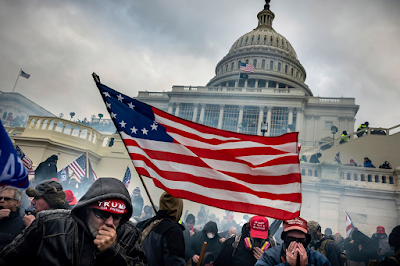 January 6, 2021. Supporters of President Donald Trump retreat from tear gas during a battle with Law Enforcement officers on the west steps of the Capitol in Washington during the attack on the day of Joe Biden’s election certification by Congress

"I was most interested in making pictures that would be different from daily news coverage and that would be particularly compelling to viewers decades from now.”--David Butow

--A solo exhibition of photographs and video by David Butow, whose new book, Brink, chronicles politics in the United States from the 2016 presidential election through the Jan. 6, 2021, insurrection, is coming to RIT’s City Art Space.

Opening Feb. 4, “Brink: Photographs by David Butow” features a gripping selection of images from the book (Punctum Press) for which Jenn Poggi, assistant professor in RIT’s School of Photographic Arts and Sciences, served as a key editor. The exhibition runs through Feb. 20. Full article here.

On January 20, 2022, the one year anniversary of President Biden’s inauguration, at 5 pm MST (4 pm PST, 6 pm CDT, 7 pm EST) David Butow will be in conversation with Steve Appleford, a contributing writer and video producer with the Los Angeles Times, Rolling Stone, and other publications. BRINK chronicles the dynamics that unfolded during the 2016 presidential election and led, finally, to the insurrection at the U.S. Capitol in January 2021. Registration required, click here.