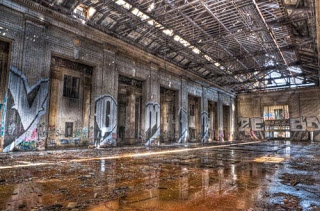 In April, the Detroit City Council voted to have its historic Michigan Central Station demolished. The decision has been met with mixed emotions: Some Detroiters feel attached to the building, viewing it as an integral element of the city skyline. Others see its sad decrepitude as a reminder of the city's decay. Listen to NPR's story here. The slide show is here, and more of Smith's work may be viewed here.

Whether an eyesore or a reminder of the good old days, most can agree on one thing: The train depot is visually striking. Photographers and explorers have been sneaking into the fenced-off station for some time, traversing its cavernous innards -- a vestige of what was once a bustling hub of hellos and goodbyes. Graffiti, rubble and shattered glass have overgrown the building's neoclassical foundation, and yet citizens are still ambivalent about its destruction. The city has postponed the demolition but has not gone so far as to set a date for reconsidering the verdict.
Detroit photographer Eric Smith has documented what remains of Michigan Central Station. He describes his series:

When I heard people were getting into the abandoned shell of Michigan Central Station in Detroit, I was curious, remembering childhood train trips to Chicago. I knew that the digital techniques I have been working with (which include high dynamic range imaging) could dramatically transform this tragic and forgotten building into a "Hyper Real" reminder of its past glory.

Michigan Central Station was Detroit's passenger rail depot from its opening in 1913 until the last Amtrak train pulled away on Jan. 6, 1988. Now abandoned, the building is of the Beaux-Arts classical style of architecture, designed by the Warren & Wetmore and Reed & Stern firms, who also designed New York City's Grand Central Terminal. The main waiting room was modeled after an ancient Roman bathhouse with walls of marble.

This portfolio is one of a series of portfolios from an architectural project on the city of Detroit. The project seeks to use architecture as a metaphor to illustrate the transformation of Detroit in the 21st century.

Smith's series is currently on display at the Museum of Contemporary Photography at Columbia College in Chicago, part of a group exhibition called The Edge of Intent.
‹ PREVIOUS   |   NEXT ›