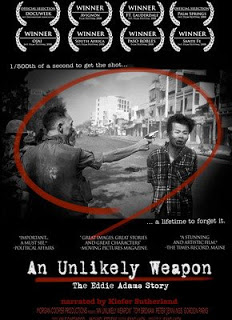 The documentary film on the legendary photojournalist Eddie Adams, "An Unlikely Weapon", will be screened in Denver and Los Angeles in July.
Denver: July 3 - 10, Starz Film Center
A special concurrent exhibit of Eddie Adams' original photographs, curated and organized by Monroe Gallery, will be on view at the Denver Press Club .
Los Angeles: July 10 - 12, Laemmle Theater, times and map here.
VARIETY
April 9, 2009
Eddie Adams' most famous photograph -- of a Vietnamese police chief putting a bullet through the head of his Vietcong prisoner -- was perhaps the most iconic image of that contentious South Asian war. While some of the esteemed talking heads in Susan Morgan Cooper's "An Unlikely Weapon" maintain it changed history, it certainly changed Adams: The curmudgeonly subject of Cooper's affectionate docu is humble to the point of self-loathing, in what will surely be a draw for arthouse auds interested in photography, late 20th-century culture/history and the effects of accidental fame.
Adams is made very much a presence in the film, so it's a constant surprise to have him referred to in the past tense by his colleagues and friends. (He died in 2004.) As Cooper's portrait eloquently displays, the late shutterbug was an artist; even his early combat photography had a compositional elegance. Adams had an eye for the big visual statement: His later work with celebrities included the over-the-shoulder shot of Clint Eastwood that became the poster for "Unforgiven."
But the 1/500th of a second it took to take the picture that changed his life was out of his control: Adams was shooting reflexively when Gen. Ngoc Loan drew his revolver, and the fact that Adams caught the very moment the bullet was still traveling through the victim's head (Adams explains all this with something of a sigh) did not make the photo art. This clearly bugged Adams, as did the fact that he'd always been associated with an image of gruesome immediacy.
There's more to Adams than one Vietnam War shot, and Cooper includes it all, from the photog's coverage of the Beatles' arrival in the U.S. (some of the archival footage seems to have been recorded in Britain) to his work shooting Penthouse Pets, and a lot of stops in between. From Muhammad Ali to Mother Teresa, from a black-veiled Jackie Kennedy to a worn-out Louis Armstrong, few major figures of Adams' times seem to have eluded his lens.
Interviewees in the film range from broadcasters Tom Brokaw and the late Peter Jennings to photographers Bill Eppridge and Nick Ut, who took their own iconic '60s photos -- Eppridge's famous shot is of the just-assassinated Robert F. Kennedy; Ut's was of then-9-year-old Phan Thi Kim Phuc running naked from a napalm attack on her Vietnamese village (Phuc is also in the film). It's their reminiscences that are the most poignant and revealing about a man who seems, in Cooper's interviews, to have done all he could to conceal himself.
Production values are excellent, the editing intelligent and the music by Kyle Eastwood and Michael Stevens unobtrusive but moving.
‹ PREVIOUS   |   NEXT ›