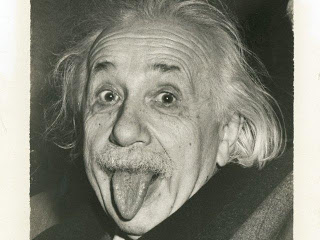 An iconic photograph of Albert Einstein was sold by a New Hampshire auction company Friday for $74,324, making it the most expensive Einstein photograph ever sold at auction, according to the auctioneers.
The photograph was taken in 1951 while Einstein was celebrating his birthday at Princeton University. Photographer Arthur Sasse tried to convince Einstein to pose with a smile for the photo, but Einstein instead stuck out his tongue, producing one of the most recognizable images of the irreverent physicist.
Einstein ordered nine copies of the photograph and signed a print for news anchor Howard K. Smith, writing in German, “This gesture you will like, because it is aimed at all of humanity. A civilian can afford to do what no diplomat would dare. Your loyal and grateful listener, A. Einstein ’53.”
Although Einstein was amused by the photograph, his tongue gesture was more than joke, according to RRAuction.com marketing director Bobby Livingston. McCarthyism was reaching a high point in the United States, and scientists like Einstein were being asked to report on the activities of their colleagues.
“This photo of Einstein is incredibly iconic, and for the first time Einstein explains why he stuck out his tongue,” said Livingston. “You can tell by his inscription that (Einstein) fully understood the power of the image, and that what he was doing was quite dangerous, considering that the government was forcing intellectuals to name names.
The photograph was purchased by David Waxman, the owner of a New York store specializing in scientific books and autographs, Livingston said.
(Monroe Gallery has several other iconic photographs of Albert Einstein.)
Copyright 2009 by TheBostonChannel.com. All rights reserved.
‹ PREVIOUS   |   NEXT ›