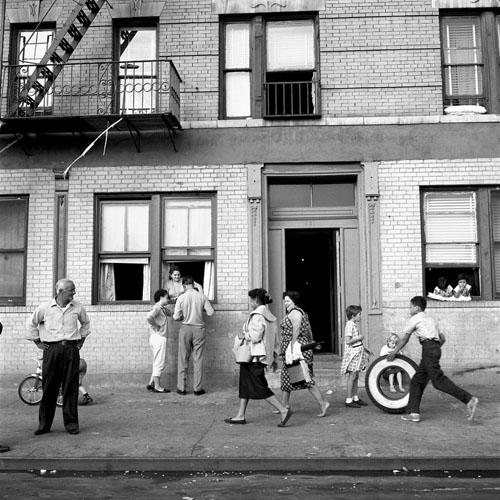 Vivian Maier was essentially unknown throughout her lifetime. But that’s changing very quickly.

Maier, who worked as a nanny in Chicago, is setting the photography and art world on fire with her work in street photography that spanned more than 40 years. But she’ll never see it – which is the way she wanted it – because she died in 2009 at age 83.

“I never imagined that I would find a gem like Vivian,” says John Maloof, of the Maloof Collection based out of Chicago. “I saw her work and immediately worked on making sure she was in the right place in the history books.”

Exhibitions of Maier’s work have been held in New York, Chicago, England, Germany, Denmark and Norway. And it’s coming to Santa Fe.

Gallery owner Sidney S. Monroe says the exhibit will have approximately 35 prints, the majority of which have never been seen.

“Vivian’s story is fascinating and it keeps getting better,” he says.

Monroe says the gallery has been working to bring the show to the City Different since September and was thrilled to be one of the first venues to host the exhibition in the United States.

“This is such a huge international story, and it speaks to Vivian’s significance in the art world now,” he says. “Our goal from day one was to bring in top-flight exhibitions. It speaks to Santa Fe and it being a world-class destination for art and photography.”

In 2007, Maloof, a real estate agent and historian, purchased 30,000 negatives on a hunch from an auction house in Chicago. Buried deep in that purchase were the virtuosic street photographs taken by a reclusive nanny in Chicago.

Maloof says he bought the 30,000 prints and negatives from an auction house that had acquired the photographs from a storage locker that had been sold off when Maier was no longer able to pay her fees.

He says after buying the collection in 2007, he acquired more from another buyer at the same auction. He now owns 100,000 to 150,000 negatives, more than 3,000 vintage prints, hundreds of rolls of film, home movies, audio tape interviews, original cameras of Maier’s, documents and other items, representing roughly 90 percent of Maier’s work.

“She has become a fascinating person to me, and I wouldn’t be promoting her work if I didn’t think it was amazing,” he says.

Maloof says he had no idea of his find until he started perusing the negatives.

“I was captivated by what I saw,” he explains. “It’s really a great body of work and no one had seen it. Of course, not all the photos were great, but the ones that are stood out immediately.”

Maloof was credited with the find, and Maier’s profile as a street photographer was born and soon went viral.

“She lived her life in a private way,” he says. “I think that’s what makes it interesting. She was a normal, working-class woman who loved photography. It really could be any one of us.”

Maloof says at 25 Maier moved from France to New York, where she worked in a sweatshop. She later made her way to Chicago in 1956, where she became a nanny.

“Most of the families said Vivian was very private and spent her days off walking and shooting pictures,” he says. “I can just imagine her walking around town with a Rolleiflex around her neck, snapping pictures.”

Maier’s photographs gain interest because of the subjects. She had an eye for fashion as well as capturing the daily lives of people.

“You can see how Vivian lived through the photographs,” Maloof says. “She captured everything that seemed interesting to her.”

Maloof says three years after Maier’s death, he’s surprised at how much interest she has gotten in the past year.

“My initial goal was to get her noticed and for her to take her place in the art world,” he explains. “I know she was a private person, but I believe her photos are a gift to the world that needed to be shared.”