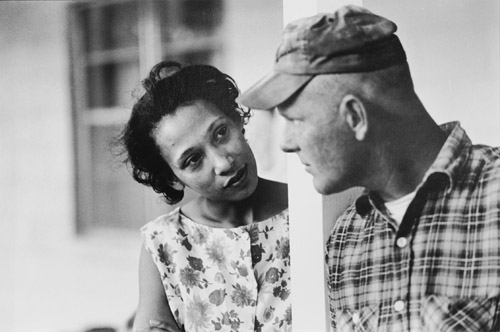 We have been covering the forthcoming documentary film about Mildren and Richard Loving, an inter-racial couple who made civil-rights history. "The Loving Story" film will premiere on HBO on Valentine's day, February 14. An exhibition of Grey Villet's vintage photographs is currently on exhibition at the International Center of Photography.

Today's New York Times has a review of the exhibit:

"Richard and Mildred Loving, an interracial couple from Virginia whose marriage prompted a benchmark 1967 Supreme Court ruling overturning state miscegenation laws, are portrayed in “The Loving Story: Photographs by Grey Villet” as heroes who fell into history by accident.

Grey Villet,  a South African photographer who worked for Life magazine, entered the story in 1965 when he traveled to Virginia to photograph the family, by then living together under an unofficial amnesty with their three children. Mr. Villet shot 73 rolls of film, but Life published only 9 images. The photographer then sent 70 prints to the Lovings. The vintage prints in this show are from that collection, as well as from Mr. Villet’s estate.

The images represent the heyday of social documentary, but also the photo-essay format established by magazines like Life and Look. There is the whiff of Walker Evans, Dorothea Lange and other 1930s documentarians, but also of W. Eugene Smith, a revered midcentury photo essayist, and David Goldblatt, a South African chronicler of apartheid"  Full post and photographs here.
Concurrently, Monroe Gallery of Photography is opening the exhibition "Grey Villet: The Lovings" on February 3, concurrent with the exhibition "Vivian Maier: Discovered". The exhibition continues through March 18, and Grey Villet's photographs of the Lovings will be on exhibit during the AIPAD Photography Show March 29 - April 1 at Monroe Gallery, Booth #419. Monroe Gallery of Photography is honored to represent the Estate of Grey Villet.
Related: Director's Interview: The Loving Story