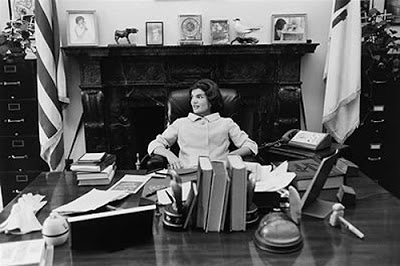 Jackie Kennedy at John. F. Kennedy's Senate desk, 1959
Santa Fe--Monroe Gallery of Photography, 112 Don Gaspar, is pleased to announce a major exhibition of photographs by Mark Shaw, concurrent with the publication of the new book "The Kennedys". The exhibition opens with a public reception on Friday, November 23, from 5 - 7 PM. The exhibition of vintage and contemporary editions will continue through January 27, 2013.
Published by Reel Art Press, this stunning new publication is the definitive collection of Mark Shaw’s renowned photographs of the Kennedys. Most of the photographs featured in the book and exhibition have never been seen before. Shaw first photographed the Kennedys in 1959 for Life magazine. He subsequently developed a close friendship with the family that gave him extraordinary and informal access to their inner circle. During the following four years, Shaw captured them at their most relaxed: in Nantucket, Hyannis Port, Jacqueline's family home in Merrywood, Virginia and on The Amalfi Coast with the Agnellis. On the campaign trail in West Virginia, pre-White House at their first proper family home in Georgetown and at the star-studded inauguration gala. He became the Kennedys’ unofficial family photographer and his captivating shots capture some of their most intimate and candid moments. Among the most memorable photographs must be the image that was JFK's personal favorite; the photograph he told his family and friends he liked best. Perhaps somewhat poignantly, as the 50th anniversary of the assassination approaches, it is the image of Kennedy walking alone in the sand dunes at Hyannis Port which resonates, alongside a later iconic and moving image of the rider-less horse and the fallen leader’s reversed riding boots.
Mark Shaw lived from 1922-1969. As a photographer he is perhaps best known for his images of Jacqueline and John F. Kennedy, however he was also a leading fashion photographer, Mark Shaw worked for Harper's Bazaar, Mademoiselle, and a host of other fashion magazines. He started working for LIFE magazine in 1952 and in 16 years shot 27 covers and almost 100 stories. Throughout the 1950's and 1960s' Mark Shaw shot the European fashion collections for LIFE, and was one of the first photographers to shoot fashion on the runways and "backstage" at the couture shows. Decades after his death, Mark Shaw’s photographs continue to be published regularly in books and magazines.
Among the many notable people Mark Shaw photographed were Pablo Picasso, Marc Chagall, Brigitte Bardot, Elizabeth Taylor, Grace Kelly, Audrey Hepburn, Melina Mercouri, Danny Kaye, Nico, Cary Grant, Pope Paul VI, Yves St. Laurent and Chanel.
In his later years Mark Shaw also began filming commercials for television. He was the winner of many awards from the American TV commercial Festival for his work in commercials and from the Art Director's club for his earlier still work. Mark Shaw's Vanity Fair Lingerie and Chase Manhattan Bank's "Nest Egg" campaign are print advertising classics. Mark Shaw worked as a top print advertising photographer until his untimely death in 1969 at the age of 47. After his death, most of his work was hastily put into storage. All but a small number of photographs remained unseen for almost 30 years. In 1999, his only child, David Shaw, and David's wife, Juliet Cuming, moved the collection to Vermont, where they took on took on the job of creating the Mark Shaw Photographic Archive. In storage for almost 40 years, Mark Shaw's work is finally being unearthed, archived and made available for this exhibition.
Copies of the new book Mark Shaw: The Kennedys are available from the gallery  $75
Monroe Gallery of Photography was founded by Sidney S. Monroe and Michelle A. Monroe. Building on more than four decades of collective experience, the gallery specializes in classic black & white photography with an emphasis on humanist and photojournalist imagery. The gallery also represents a select group of contemporary and emerging photographers. Monroe Gallery was the recipient of the 2010 Alfred Eisenstaedt Award for Excellence in Photojournalism.
Gallery hours are 10 to 6 Monday through Saturday, 11 to 5 Sunday. Admission is free. For further information, please call: 505.992.0800; or email.info@monroegallery.com