Steve Schapiro, Then and Now: Rare Images from a Photography Legend 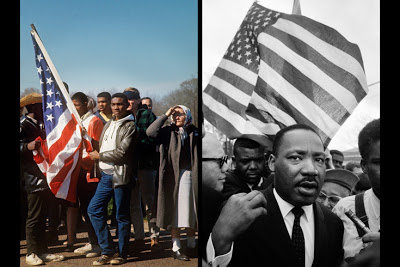 Steve Schapiro
left: Selma Marchers On the Road, 1965, right: Martin Luther King Jr., Selma March 1965
"Those who joined the Selma March could hold the flag high. It was a long symbolic walk and the possibility of violence was always there. Dr. King, the symbol of the non-violent revolution seemed to scour the crowds with a portent of what might follow."


Just the list of people Steve Schapiro has photographed during his career reads like a Who’s Who of the most influential politicians, celebrities and newsmakers in American history over the last five decades. But that Schapiro captured his subjects during their pivotal and seminal moments—Robert F. Kennedy during his 1968 presidential campaign; Marlon Brando on the set of The Godfather; Andy Warhol and muse Edie Sedgwick in The Factory, among others—lends his photographs an added significance. They aren’t just remarkable portraits of remarkable people, but snapshots into our country’s historical and cultural milestones.

Schapiro’s output over his more than 50-year career has been prolific, and many people have probably seen one of his photographs whether they realize it or not. But his new book, Then and Now, gives readers a look at Schapiro’s lesser-known work; the majority of pictures has never been published. “There were so many pictures that I loved but didn’t fit with the format of my previous books, so this was a chance to bring forth that work,” he says. The book is comprised of single images shown over a spread, as well as spreads of disparate images that share a composition or theme—one such example has a portrait of Martin Scorcese holding a gun and grapes on the left page, and a portrat of Mia Farrow holding a baby on the right. “I wanted to make a book that was interesting on every page,” says Schapiro. “That evolved into the idea of working with double pages where one picture worked with another.”

Schapiro first took an interest to photography at 9 while at summer camp. He fell in love with “the magic of photography” in the dark room, where he became fascinated by how pictures came to life after being dipped in various formulas. But it wasn’t until he discovered Henri Cartier-Bresson’s The Decisive Moment, as a teenager, that his interest really took hold. He began trying to capture his own decisive moments on the streets of New York City, before going to study the formal aspects of photography under W. Eugene Smith.

In 1961, amid the height of the Civil Rights movement, Schapiro started working as a freelance photographer for publications such as LIFE, Rolling Stone, TIME and Newsweek. Over the next 10 years, which Schapiro calls “the golden age of photojournalism,” he would cover the decade’s most significant events, including Martin Luther King, Jr.’s 1963 march in Selma, and later, King’s abandoned motel room after this assassination, as well as the “Summer of Love” in Haight-Asbury and Robert F. Kennedy’s 1968 presidential campaign. “It was an incredible time to be a photojournalist because there was more of an emotional flow—an ability to do more emotional pictures that captured the spirit of a person,” says Schapiro of the period. “I was able to spend a lot of time with people—Bobby Kennedy went to South America for four weeks and I got to go with him. When I got really sick there, Ethel Kennedy brought me Bobby’s pajamas to wear. Bobby was someone who I became friends with, but everyone who worked with him loved him.”

Despite his success as a photographer, Schapiro maintains that he hasn’t taken his most important picture yet—and doesn’t have any idea what it might be. In the meantime, there’s one subject who continues to elude him: “President Barack Obama. I would love to photograph him.”