FEBRUARY IN HISTORY: NIXON IN CHINA, 1972 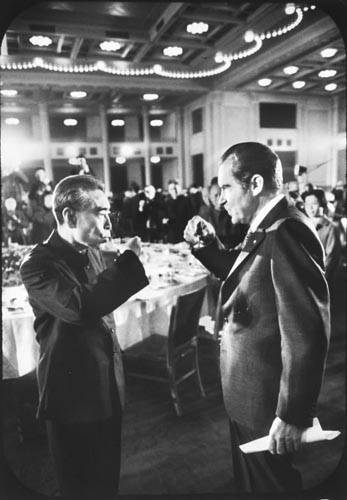 From February 17-28, 1972, President Nixon visited the PRC and traveled to Peking, Hangchow, and Shanghai. He was the first U.S. president to visit the People's Republic of China since it was established in 1949.

On February 21, 1972, President Nixon met with Chairman Mao Tse-tung.  After a modest reception at Peking airport, the president was formally welcomed at a lavish banquet held in the Great Hall of the People and hosted by Prime Minister Chou En-lai. Using one of Mao's own quotations, Mr Nixon said it was time to seize the day and seize the hour "for our two peoples to rise to the heights of greatness which can build a new and better world". There followed an elaborate round of toasts, in which the 800 guests at the banquet wandered from table to table clinking thimble-sized glasses containing Chinese firewater.

Now, it is common to see the familiar tag: Made In China, but it wasn't always this way. After President Nixon’s trip, relations between the two countries continued to develop, eventually leading to a free-trade policy.


Related:
Listen to Nixon discuss his rationale for the trip, and his reasoning for the importance of restoring communications with the People's Republic of China.

"Nixon In China": The Opera