For the Record: Searching for Objectivity in Global Conflict 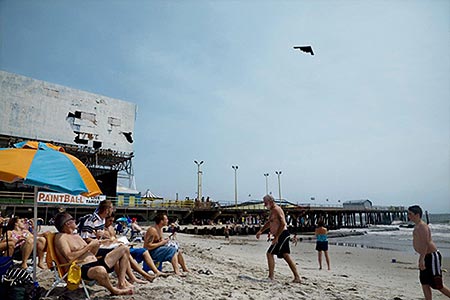 Bombarded by information from a variety of sources, it is often difficult as observers of current affairs to fully make sense of the concepts and facts presented. Artists offer us the opportunity to engage and interpret this information in an alternative way. They were the first compelled to record and present the events of the world. Artists illustrate and record many aspects of war in a variety of ways, whether through genuine factual representation (witness accounts of war) through war reportage drawing and/or documentary work or as artistic interpretation (visual response to war). The artists in For The Record offer a testament of the effects of war and conflict on people, societies and the physical earth.

For the Record Symposium This Weekend, September 30 and Saturday, October 1:

A two-day symposium highlighting the Montserrat Gallery exhibit, "For the Record" will open Friday, Sept. 30 with panel discussions with veterans, talks by artists and writers, a showing of Sebastian Junger's film, "Restrepo" and a keynote address by American art critic, curator and Dean of the Yale School of Art Robert Storr.

The exhibition, curated by Montserrat faculty members artist Rob Roy and social historian and author Gordon Arnold, along with Gallery Director Leonie Bradbury, came in part from a 30-year conversation between the two faculty on the topic of conflict, how it is interpreted, and leaving the viewer to draw their own conclusions.

The symposium activities are free and open to the public, but registration is requested.

Saturday, Oct. 1
Dane Street Church, 10 Dane Street, Beverly, MA
9:00am
Symposium welcome with coffee
9:30 am
AUTHOR TALK Susanne Slavick
Topic: OUT OF RUBBLE, an anthology of artists responding to the aftermath of war by Susanne Slavick, Andrew W. Mellon Professor of Art at Carnegie Mellon University, Pittsburgh. She will discuss a selection from nearly 40 international artists who consider the causes and consequences of rubble, its finality and future, moving from decimation and disintegration to the possibilities of regeneration and recovery. Approaching the 10th anniversary of our military engagement in Afghanistan and continuing conflict in Iraq, the book and related exhibits remain all too timely.
10:30am
ARTIST TALK Nina Berman
Topic: the American experience by Nina Berman a documentary photographer with a primary interest in the American political and social landscape. Her powerful images of wounded American veterans from the Iraq War are internationally known with recent exhibitions at the Whitney Museum of American Art 2010 Biennial. She is the author of two monographs, Purple Hearts - Back from Iraq and Homeland.

1 pm
LECTURE Steven Dubin, Ph.D.
Topic: Peace and Art, a lecture by arts and culture scholar Steven Dubin, Ph.D. Dubin has written and lectured widely on censorship, controversial exhibitions, the culture wars, popular culture, and mass media. He is interested in the intersection of culture and politics; the evolution of the arts from providing ideological support as well social resistance during South Africa's apartheid era, to becoming a force in building and critiquing democracy. He examines the interplay between the arts, ideology and power; the tension between creative freedom and social control; the arts as a vehicle of expression for otherwise socially marginalized people. Dubin will demonstrate how the visual and performing arts can also critique and thus challenge established social power.
2 pm
LECTURE Gordon Arnold, Ph.D., author and professor at Montserrat College of Art
Topic: Arnold will address how art, film, and other modes of cultural production reveal and probe the shape and scope of the overarching ideological system that informs much of contemporary American culture. Gordon Arnold, Ph.D. is an active scholar, writer and social historian who teaches courses in the social sciences and mass media at Montserrat College of Art.
2:30 pm
FILM SCREENING Restrepo by Sebastian Junger
Winner of the 2010 Sundance Film Festival Grand Jury Prize for documentary, Restrepo chronicles the deployment of a platoon of U.S. soldiers in Afghanistan's Korengal Valley, one of the most dangerous postings in the U.S. military. The movie focuses on 15 soldiers based at Outpost Restrepo, named after a platoon medic killed early in the deployment. Filmed by author Sebastian Junger and award-winning photographer Tim Hetherington, Restrepo takes viewers on their own 90-minute deployment, without comment or agenda.
Co-director Tim Hetherington, an experienced photojournalist who reported on reported social and political conflict worldwide, was killed in fighting in Libya on April 20, 2011.
4 pm
PANEL DISCUSSION
Topic: Media Representations of Global Conflict moderated by Vietnam War Veteran Wayne Burton, President of the North Shore Community College. Panelists include: Steven Dubin, Montserrat Professors Gordon Arnold and Rob Roy; James O'Neill, Nina Berman, Susanne Slavick
5 - 6:30 pm
CLOSING RECEPTION
Location: Montserrat Gallery, Montserrat College of Art, 23 Essex St., Beverly(the college is a three minute walk from the Dane Street Church.)