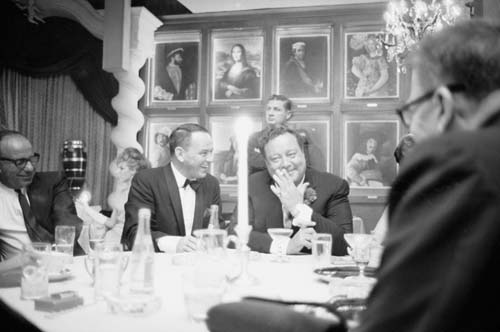 In mid-20th century, performers would let magazine photographers get close. Audrey Hepburn did so with Mark Shaw in 1953. James Dean let Dennis Stock hang out in 1955. Leonard McCombe shadowed Kim Novak in 1956. John Dominis seized his opportunity with Frank Sinatra in 1965.

John Dominis: It was Sinatra’s 50th birthday, and what he probably thought was that he was going to have a long interview with a writer and maybe a few formal pictures. Often with famous people, when it comes to actually taking real pictures of their lifestyle, they balk. They don't want a guy hanging around every minute of the day and night. But that's what we wanted to do.

I went down to Florida, where Sinatra was performing. I met him and hung around backstage. After the show he’d eat with a bunch of friends. For about a week I just hung around. People would come by all the time, and he'd say, “Hey, John, take a picture of old Joe and me.” So I'd go snap and take this snapshot.

We went out to Las Vegas, and at some point on the plane I said, “Everything's great, but I'd like to start getting some of the stuff we hear about. You have parties late at night with some of your old buddies and things like that.” So he invited me to a party. He had all these girls there and guys up in his suite, and they drank, and he jerked the tablecloth out from under all the dinner dishes on a table. I'd never seen that trick really done. It worked. I was amazed. He didn't spill any dishes on the floor. I shot all this, and he got smashed and ended up singing in the closet with Jerry Lewis. Good stuff. I took three months with Sinatra. That’s unheard of nowadays.

(Interview dated October 27, 1993 was printed in full in the Bullfinch Press book, LIFE Photographers: What They Saw, in 1998. These photographs  ©Time Inc., are courtesy The LIFE Gallery of Photography)