Grant Baldwin's 2019 Pride Festival image featured: Officials in counties outside Charlotte censored LGBTQ+ content. Can they do that?

Via The Charlotte Observer 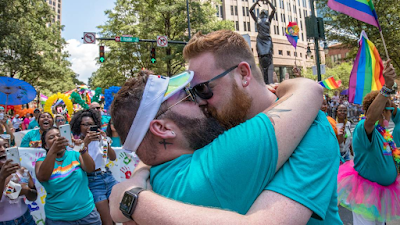 "Before the pandemic put a pause to the Queen Cityâ€™s in-person festivities, Charlotte Pride hired local photojournalist Grant Baldwin to document its 2019 parade. Among the shots, Baldwin snapped a portrait of two men â€” Justin Colasacco and Bren Hipp â€” kissing in celebration just after getting engaged.

As a rainbow-festooned gaggle of cheers erupted behind them, Baldwin thought the shot would be perfect for the Gaston County Museumâ€™s roundup of artistic and documentary photographs. Museum officials agreed initially. They accepted the photo and displayed it as part of the summer 2022 â€œInto the Darkroomâ€ exhibit, Baldwin said. Ultimately, county manager Kim Eagle told museum staff to replace the photograph with one â€œmore considerate of differing viewpoints in the community,â€ county spokesman Gaub said. It remains shelved, but the removal has sparked calls for more LGBTQ recognition in the county. It garnered praise for Baldwin and the couple elsewhere. The photo will take a place of honor in a New Mexico exhibit soon. â€œItâ€™s reaffirmed in me that thereâ€™s still more work to be done to live up to the motto of Gastonia being an All-American city â€“ live, work and play â€“ when a subset of the population is not viewed as equals,â€ Charlotte Pride spokesman and Gastonia resident Clark Simon said. â€œSo thereâ€™s more work to be done.â€

Grant Baldwin's photograph is featured in the exhibition "Imagine A World Without Photojournalism", on view through September 18, 2022. 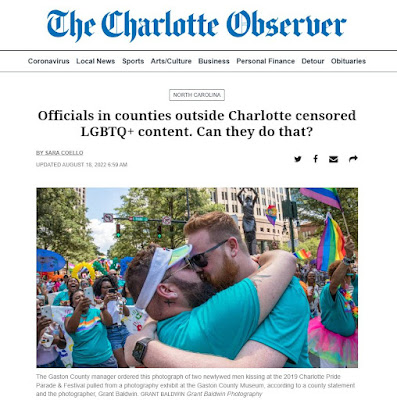