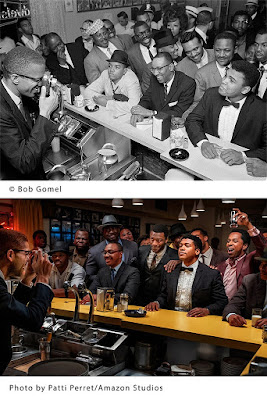 One Night in Miami is a movie streaming on Amazon Prime. The film, directed Regina King, is a fictional account based on a true story of the events after Cassius Clay defeated Sonny Liston in February 1964 in Miami.

As you can see in the images above, the movie is based on an actual photograph taken by Bob Gomel. Amazon Studios photographer Patti Perret painstakingly recreated the iconic photograph that appeared in LIFE Magazine.

In the actual picture Sam Cooke and Jim Brown are not in the image as they are in the picture by Perret. The movie is a fictional account based on actual events.

The picture by Bob is featured in the documentary (also streaming on Amazon Prime) Bob Gomel: Eyewitness, as is the entire story leading up and including the fight, as well as, the post fight celebration at The Hampton House where this image was taken.

Bob Gomel owns the rights to the original image. Signed prints are sold through Monroe Gallery in Santa Fe, NM.

Bob was not consulted, credited, or compensated in any way in the making of the film or the recreation of the image.