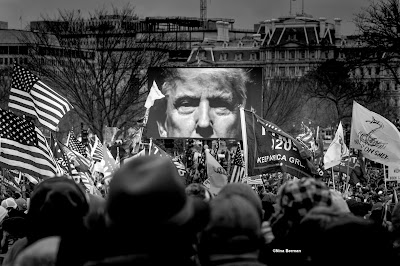 President Trump's image appears onscreen at a rally outside the White House
January 6, 2021 by Nina Berman
Photographer Nina Berman covered the January 6 Insurrection at the Capitol in Washington, DC. Her photographs of that day have been published internationally, including National Geographic, Vice News, and L'Illustre. Berman's photographs are included in the current gallery exhibition "History Now".
A historic day in photos: from a pro-Trump insurrection to a pre-dawn Biden victory sealed
"The normally solemn atmosphere at the Capitol Building was transformed into a scene of chaotic violence unprecedented in modern times on Wednesday afternoon, as a mob of insurgents waving Trump flags, Confederate symbols, pro-Nazi messages, and other symbols of right-wing extremist groups breached the building’s security, halting proceedings to certify Trump’s defeat and forcing lawmakers to take cover as they were evacuated to safety with gas masks, as violent protesters roamed hallways, smashed windows, and destroyed Congressional property."  Via National Geographic
Full article with photographs 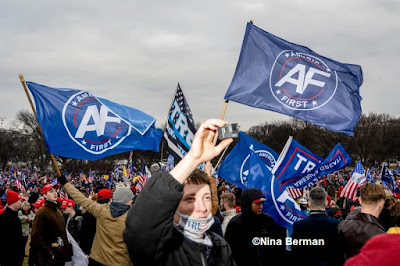 What We Saw at the Capitol Hill Insurrection By Ishaan Jhaveri and Nina Berman
"We are part of a team of researchers at the Tow Center for Digital Journalism and Columbia University’s Engineering and Journalism schools that has been developing a tool called VizPol, which helps journalists identify unfamiliar political symbols, since April 2019. Nina had the idea to help improve journalists’ understanding of visual political symbols at a right-wing rally in 2018 after she saw a TV journalist fail to point out a contradiction between what an interviewee was saying and what a symbol she had tattooed on her forearm suggested about her political beliefs. As part of keeping the app’s database up-to-date with the constantly evolving landscape of symbols, we have paid close attention to the various symbols appearing at political rallies across the political spectrum in the United States."   Via Vice News
Full article with photographs
La Chute de la Maison Trump    Via L'Illustre
View the exhibition "History Now"