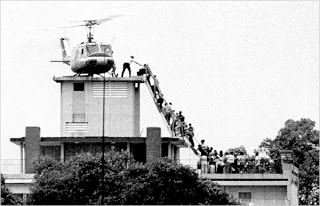 HONG KONG â€” Hubert Van Es, a Dutch photojournalist who covered the Vietnam War and took one of the best-known images of the American evacuation of Saigon in 1975 â€” people scaling a ladder to a helicopter on a rooftop â€” died here on Friday. He was 67.
The Foreign Correspondentsâ€™ Club of Hong Kong announced his death on behalf of his wife, Annie. Mr. Van Es fell into a coma a week ago when he suffered a brain aneurysm. He died on Friday at Queen Mary Hospital.
Mr. Van Es was in the offices of United Press International on April 29, 1975, when he saw about 30 Americans on the rooftop of an apartment building several blocks away climbing a long ladder to board a Central Intelligence Agency helicopter.
Mr. Van Es, known as Hugh, took the photo using a long lens and sent it out over the U.P.I. wire service. The building in the picture housed C.I.A. officials and families, but in reprintings it has often been described incorrectly as the American Embassy in Saigon. Thousands of people were evacuated by helicopter during the fall of South Vietnam.
The photo became one of the warâ€™s defining images. Mr. Van Es took other memorable pictures of the conflict, like one of a wounded soldier, a cross gleaming against his silhouette, from the battle of Hamburger Hill in May 1969. He gained a reputation for fearlessness. But for the rest of his life he was known primarily for that image from Saigon.
â€œHe was obviously a very good photographer, but what he did was to capture the end,â€ said Ernst Herb, the president of the correspondentsâ€™ club.
Born in Hilversum, the Netherlands, Mr. Van Es decided to become a photographer after seeing an exhibition of the work of the renowned war photographer Robert Capa. He arrived in Hong Kong as a freelancer in 1967, joined The South China Morning Post as chief photographer and initially went to Vietnam the following year, after getting a job as a sound man for NBC News, according to The Associated Press. After a stint with NBC, he joined the A.P. photo staff in Saigon from 1969 to 1972 and then covered the last three years of the war, from 1972 to 1975, for U.P.I.
When he took the Saigon picture, Mr. Van Es was in the process of leaving U.P.I. to become a freelancer again. Based in Hong Kong after the war, he also covered the Moro rebellion in the Philippines and the Soviet invasion of Afghanistan.
Mr. Van Es was dismayed that he did not receive royalties from the use of the Saigon photo, which belonged to U.P.I. The rights have since been sold twice, along with many other photos taken by the wire serviceâ€™s photographers. Bill Gates, co-founder of Microsoft, now owns the rights to the photo through Corbis, a company he created.
Besides his wife of 39 years, Mr. Van Es is survived by an older sister in the Netherlands, said Kees Metselaar, another photojournalist based in Hong Kong.
Monroe Gallery of Photography is honored to represent photographs by colleagues of Hugh Van Es, including Eddie Adams and Nick Ut