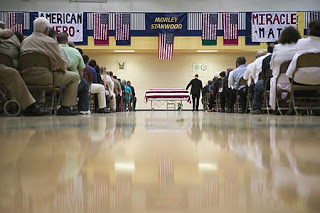 Memorial Day, originally called Decoration Day, is a day of remembrance for those who have died in our nation's service. All to often we celebrate it more as the start of summer.

In a reversal of an 18-year-old military policy that critics said was hiding the ultimate cost of the wars in Iraq and Afghanistan, the news media has just recently been allowed to photograph the coffins of America’s war dead as their bodies are returned to the United States, but only if the families of the dead agree.

Tami Silicio was the first person to challenge the ban. Photojournalist Eric Smith, as part of a project documenting the war's impact on his local Michigan community, has been photographing funerals for Iraq veterans, but with another purpose.

Photojournalist Eric Smith has gone in search of Middle America, which he defines as the people living in the nation’s small towns and the less-than-glamorous cities far from the coasts. “Middle America drives our economy, defines popular culture, and fights our wars,” Smith said during a recent phone interview from his home in Auburn Hills, Mich. He insists that without the interest of people who live far from major urban centers, Britney Spears would have been quickly forgotten. Smith isn’t an economist, and he admits that perhaps he’s wrong about the cultural impact of the spending power of small towns. But an Associated Press study has confirmed his belief about their importance to the Iraq war: half of U.S. troops killed in Iraq came from communities with fewer than 25,000 people. And one in five soldiers hails from a town with fewer than 5,000 residents, according to AP. In Michigan’s towns Smith witnessed the funerals of U. S. soldiers killed in Iraq; the Rev. Fred Phelps and his congregation from the Westboro Baptist Church in Topeka, Kan., who picket the funerals of dead soldiers and hold signs with crude messages expressing their belief that U. S. troops die because an avenging God is angry with America’s tolerance of homosexuality; and thousands of men and women who roar into those towns on Harley-Davidson motorcycles to pay respect to their fallen heroes. The clash of beliefs Smith witnessed at those funerals spurred the photo project In America — The War & Patriotism.

Sidney and Michelle Monroe, owners of Monroe Gallery of Photography, saw Smith’s In America — War & Patriotism and Middle America images during a portfolio review sponsored by the Center for Photography, now known simply as Center. Smith is the first new artist the gallery has agreed to represent in several years, Michelle Monroe said. The Monroes felt his work builds on the humanist traditions of the gallery’s more established artists, such as Berenice Abbott and Gordon Parks. Two of Smith’s photographs are included in Speak Truth to Power, which runs through Sept. 23 (2007); more hang in an alcove in back of the main gallery. While Smith’s Middle America captures moments most Americans will easily recognize as examples of our diversity — a woman installing a National Rifle Association display at the Lenawee County Fair in Adrian, Mich.; the white hearse at Rosa Parks’ funeral in Detroit — War & Patriotism may leave people feeling as if they are looking into a distorted mirror or a parallel universe.

“I started following an organization called the Patriot Guard Riders,” Smith said. “ They are all bikers; most are Vietnam veterans.” About three years ago members of the Patriot Guard Riders started showing up at military funerals to create a barrier between the families and friends of troops killed in Iraq and Afghanistan and members of the Westboro Baptist Church, who were picketing those funerals with signs that read “America is doomed” and “God hates fags.” Most American Christians might believe that God loves everyone, but Westboro’s Web site posts a 94- page manifesto that calls that belief “ the greatest lie ever told.” At military funerals, members of the church have greeted mourners with sneers and hateful rhetoric, and that, Smith said, has touched a raw nerve in many Vietnam veterans. For members of the Patriot Guard Riders, creating a barrier out of flags and their own bodies is cathartic, Smith said. “They do not want these kids treated as they were treated — spit on and harassed. For a lot of these guys, this is a response to the treatment they received more than 30 years ago.” In his photographs, Smith has captured moments when the spit and polish of military honor guards has found common ground with white-haired, bearded, leather-clad bikers.

Westboro Baptist Church members haven’t shown up at the recent military funerals Smith attended, but the Patriot Guard Riders keep coming. “They now claim 100,000 members nationally,” he said of the bikers. “They’ll do whatever the family wants them to do. They’ll form a flag line; they’ll join the procession to the grave. Sometimes they lead that procession.” Many talk about parallels between the Iraq war and Vietnam: official lies led the nation into both wars, which quickly became quagmires, Smith said, but perhaps the deepest connection is visible during these funerals, as one generation offers another the respect it longed for but never received. “Almost all the funerals I have attended are in small­town America,” Smith said. “Quite often, not just the Patriot Guard but half the town shows up.” Smith took a picture at a funeral in a high- school gymnasium in Morley, Mich. “ The town’s so small that two towns had to come together to build a high school, but it was standing room only with 500 bikers lined up outside,” he said. “A lot of these kids were football players and popular. They are 18, 19, 20, or 21 — fresh out of high school — so the whole school shows up.”

Eric Smith's photographs of the abandoned Michigan Central Train Depot are featured in the Museum Of Contemporary Photography (Chicago) exhibit through July 5.
‹ PREVIOUS   |   NEXT ›