IRVING PENN IS DEAD AT 92 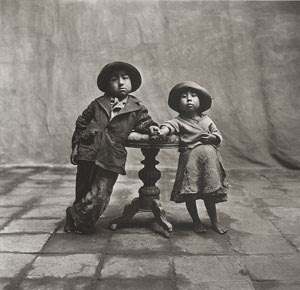 Irving Penn, one of the 20th century’s most prolific and influential photographers of fashion and the famous, whose signature blend of classical elegance and cool minimalism was recognizable to magazine readers and museumgoers worldwide, died Wednesday morning at his home in Manhattan. He was 92.
His death was announced by Peter MacGill, his friend and representative.
Mr. Penn’s talent for picturing his subjects with compositional clarity and economy earned him the widespread admiration of readers of Vogue during his long association with the magazine, beginning in 1943. It also brought him recognition in the art world; his photographs have been exhibited in museums and galleries and are prized by collectors.
His long career at Vogue spanned a number of radical transformations in fashion and its depiction, but his style remained remarkably constant. Imbued with calm and decorum, his photographs often seemed intent on defying fashion. His models and portrait subjects were never seen leaping or running or turning themselves into blurs. Even the rough-and-ready members of the Hell’s Angels motorcycle gang, photographed in San Francisco in 1967, were transformed within the quieting frame of his studio camera into the graphic equivalent of a Greek frieze.
Instead of spontaneity, Mr. Penn provided the illusion of a seance, his gaze precisely describing the profile of a Balenciaga coat or of a Moroccan jalaba in a way that could almost mesmerize the viewer. Nothing escaped the edges of his photographs unless he commanded it. Except for a series of close-up portraits that cut his subjects’ heads off at the forehead, and another, stranger suite of overripe nudes, his subjects were usually shown whole, apparently enjoying a splendid isolation from the real world.
He was probably most famous for photographing Parisian fashion models and the world’s great cultural figures, but he seemed equally at home photographing Peruvian peasants or bunion pads. Merry Foresta, co-organizer of a 1990 retrospective of his work at the National Museum of American Art, wrote that his pictures exhibited “the control of an art director fused with the process of an artist.”
A courtly man whose gentle demeanor masked an intense perfectionism, Mr. Penn adopted the pose of a humble craftsman while helping to shape a field known for putting on airs. Although schooled in painting and design, he chose to define himself as a photographer, scraping his early canvases of paint so that they might serve a more useful life as backdrops to his pictures.
He was also a refined conversationalist and a devoted husband and friend. His marriage to Lisa Fonssagrives, a beautiful model, artist and his sometime collaborator, lasted 42 years, ending with her death at the age of 80 in 1992. Mr. Penn’s photographs of Ms. Fonssagrives not only captured a slim woman of lofty sophistication and radiant good health; they also set the esthetic standard for the elegant fashion photography of the 1940s and ’50s.
Ms. Fonssagrives became a sculptor after her modeling career ended. In 1994, Mr. Penn and their son, Tom, a metal designer, arranged the printing of a book that reproduced his wife’s sculpture, prints and drawings. In addition to his son, Mr. Penn is survived by his stepdaughter, Mia Fonssagrives.Solow (who renders her name with a dot), a sculptor and jewelry designer; his younger brother, Arthur, the well-known director of such films as “Bonnie and Clyde,” and nine grandchildren.
Continue reading the full obituary here.
‹ PREVIOUS   |   NEXT ›