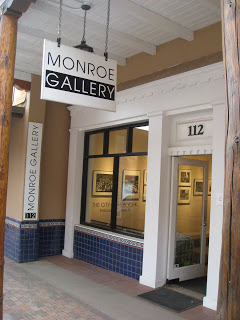 The fall season is very busy for several Monroe Gallery photographers. Stephen Wilkes is being featured at Monroe Gallery in his first-ever retrospective exhibition. The exhibition features several new photographs, and will continue through November 22.
Eris Smith's photographs are featured in the first first installment of Michigan Public Radio's "The Picture Project". His series of photographs titled "What We Eat" is running through October 2009. For more of Smith's work, click here.
Bill Eppridge just returned home from the Photography at The Summit workshop and speaking at the Senior World Games in St. George, Utah. He is appearing at the annual Eddie Adams workshop, Barnstorm, October 8,9,10; and then on October 20th Eppridge receives The Missouri School of Journalism's Missouri Honor Medal for Distinguished Service in Journalism.
The Beatles formed in April, 1960; and the band split up on April 10, 1970. 2010 will be the respective 50th and 40th anniversaries of the seminal dates in Beatles history. Bill Eppridge was there when they arrived, and we are pleased to share his special collection of photographs of The Beatles.

On November 17, the Skirball Cultural center in Los Angeles is featuring nearly 170 unforgettable images by more than thirty-five photographers, Road to Freedom: Photographs of the Civil Rights Movement, 1956â€“1968. Included in the exhibition are photographs by Bill Eppridge and Steve Schapiro. The exhibit is complemented by sound recordings of music and speeches, artifacts, and other archival materials that provide historical context, and will be on view through March 7, 2010.

On the eve of the fifth anniversary of his death, the extensive photographic archive of Pulitzer Prize-winning photojournalist Eddie Adams has been donated by his widow, Alyssa Adams, to the Dolph Briscoe Center for American History at the University of Texas at Austin.

An exhibit of Adams' photographs will be on display at the Briscoe Center's Sid Richardson Hall until January 16, 2010, and on October 28, 2009, the center will host a screening of "An Unlikely Weapon," a documentary film that examines Adams' life. Showing at the Blanton Museum of Art on the University of Texas at Austin campus, the film is free and open to the public. The movie was made by filmmaker Susan Morgan Cooper along with the photographer's sister-in-law, Cindy Lou Adkins. After the screening, remarks are scheduled to be made by Alyssa Adams along with David Hume Kennerly.
And, save the date for a major exhibition of Neil Leifer's iconic sports photography. On November 13, the Annenberg Space for Photography opens "Sport: Iooss and Leifer". Two of the worldâ€™s most preeminent sports photographers come together in this compelling exhibit celebrating the athlete, which will run through March, 2010.
Congratulations to all! Watch for news of our next exhibit, "On The Town", opening November 27. The subject has provided rich material for photographers for decades: magnificent environments, beautiful and exquisite women and handsome and poised men celebrating with exuberance and gusto. Also pictured are some of the simpler pursuits of happiness, such as when the drive-in theater and drive-in restaurant were novel and luxurious attractions. Just in time for the Holidays!