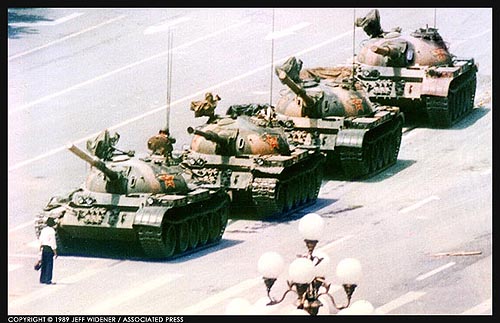 June 5, 1989, Tiananmen Square: A day after the military opened fire on protestors, photographer Jeff Widener was setting up the shot for the now iconic "tank man" image: "I was leaning over the balcony aiming at this row of tanks, and the guy walks out with this shopping bag and I was thinking 'the guy is going to ruin my composition.'" The final photo won the Scoop Award in France, the Chia Sardina Award in Italy, and was a finalist for the Pulitzer Prize

The Charlie Rose Show:  Charlie Rose has a conversation with award-winning photojournalist Jeff Widener who took one of the most famous photographs of the 20th century

Jeff Widener is the photographer who took the famous ‘Tank Man’ photograph near Beijing’s Tiananmen Square on June 5, 1989, during a crackdown on pro-democracy students that stunned the world. On the eve of the 25th anniversary of the photograph, interviews with Weidner are featured in many news outlets, a few are linked below.

"Each year in the run-up to the anniversary of the Tiananmen Square killings, China tries to intimidate journalists into silence. The 25th anniversary seems to have prompted an even broader crackdown," said CPJ Deputy Director Robert Mahoney from New York.