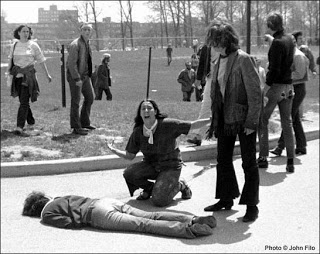 Monroe Gallery of Photography is honored to announce it is now representing John Filo and his Pulitzer-Prize winning photograph of the National Guard shooting at Kent State. This past May 4 was the 39th anniversary of the G company of the Ohio National Guard firing on student protesters.
May 4, 1970 has become a day forever etched into American history. On that day, four Kent State University students were killed and nine students were wounded by National Guardsmen who were called onto the campus in response to protests and demonstrations against the Vietnam War. John Filo was a senior at Kent State working in the student photography lab when the shots rang out just after noon on that day. During the confrontation and ensuing chaos, he photographed a then 14-year-old runaway named Mary Vecchio as she kneeled over the bleeding body of Jeffrey Miller. Filo received the Pulitzer for his photograph while still a student at Kent State.

Filo joined the Associated Press in Chicago in 1971 where he worked as a photographer for 10 years. He has also worked at the Philadelphia Inquirer, the Baltimore Evening Sun, Sports Illustrated, and has served as the National Picture Editor for Newsweek. For the past five years, Filo has held the position of manager of photo operations for CBS.

This photograph will be featured in the important exhibition: "A Thousand Words: Masters of Photojournalism" at Monroe Gallery, Santa Fe, July 3 - September 27.
‹ PREVIOUS   |   NEXT ›