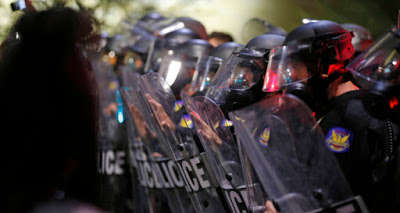 Police in riot gear block a street as hundreds of marchers take to the streets to protest against the recent fatal shootings of black men by police Friday, July 8, 2016, in Phoenix.
(AP Photo by Ross D. Franklin

Democrat and Chronicle:   Two 13WHAM reporters were detained about 12:45 a.m. by police officers. Officers took the handcuffs off the reporters and released them minutes later. Mayor Lovely Warren apologized to the reporters

The Independent: Black Lives Matter protest: Video of activist being arrested while talking to reporters in Rochester goes viral

The Louisiana National Lawyers Guild, which is providing legal support to protesters, set up an online fund-raiser aimed at raising money to bail out protesters arrested in Baton Rouge.


On Saturday, as protests continued, a reporter from the Baton Rouge television station WAFB was detained by police officers. In a statement to BuzzFeed, WAFB confirmed one of its journalists had been arrested and said it was unclear whether police had charged the reporter with any crimes.


Later Saturday, New Orleans public radio station WWNO confirmed on Twitter that one of its reporters had been arrested on assignment in Baton Rouge:


Black Lives Matter protests are not an unfamiliar sight for many American cities, but they gained new prominence this week after two Black men were killed by police officers.
Philando Castile, a 32-year-old Black man in St. Paul, Minnesota, was shot several times while his girlfriend recorded the whole incident on Facebook Live. Alton Sterling, a 37-year-old Black man, was shot to death by officers in an incident that became widely known after a cellphone video of the encounter began circulating widely.
At a rally Thursday night, a gunman killed five police officers and injured seven others as they were trying to protect a protest in Dallas.
Correction: A previous version of this story incorrectly referred to the White House. We apologize for the error. Thanks to Mozes Zarate for pointing out the mistake.