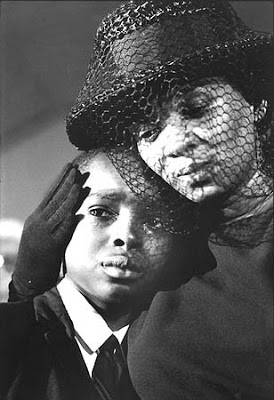 
Four years ago when photography curator Julian Cox moved from L.A.'s J. Paul Getty Museum to Atlanta's High Museum of Art, he looked for a project that would connect him to his new community. The answer came quickly: a commemoration of the 40th anniversary of the death of the Rev. Martin Luther King Jr.

"King was a national figure, but he was also a man of Atlanta," says Cox, who set out to organize a landmark exhibition and build the preeminent collection of its kind at an American art museum. The High's tiny trove of 15 prints grew to 325 by 2008, when â€œRoad to Freedom: Photographs of the Civil Rights Movement, 1956-1968â€ opened in Atlanta.

The show subsequently acquired larger significance -- at the Smithsonian Institution's S. Dillon Ripley Center in Washington, D.C., where it became a major attraction for throngs that turned out for President Obama's inauguration.

And now "Road to Freedom" has come to Los Angeles, where it is on view at the Skirball Cultural Center. The latest, expanded edition has a section on L.A.'s civil rights history and a companion show comparing Eric Etheridge's recent portraits of the 1961 Mississippi Freedom Riders with vintage mug shots. There are also documentary films and a lineup of public events. Concurrently, the California African American Museum will present a High Museum-organized exhibition on progressive social change.

Robert Kirschner, director of the Skirball Museum, said that Cox's exhibition is well suited to an institution devoted to deepening appreciation of Jewish heritage and American democratic ideals.

"The civil rights movement was about equality and justice and human dignity and freedom," he says. "The Skirball has understood those to be primary Jewish ideals." Hosting the show offered an opportunity to talk about the Jewish role in the movement, remember events in Los Angeles and team up with the museum in Exposition Park, he says.

"Road to Freedom" is billed as the largest exhibition of civil rights photographs in more than 20 years. For Cox, a native of Britain, it's much more: an intense American experience that explores the nature of documentary photographs, reveals motivations of the photographers and exposes hearts and souls of people whose lives were profoundly changed by the movement.

"Most of the artists who recorded this history photographically are still alive and as passionate today about their involvement in the story as they were then," Cox says. "They were very happy to talk about it and supportive of my ambition to grow the collection. The subjects of the photographs were equally important sources. For me, a relative neophyte in this slice of history, it was a wonderful educational voyage -- very much the kind of research where one person leads you to another."

One source was Ben Chaney, the younger brother of James Chaney, who with Andrew Goodman and Michael Schwerner was kidnapped and murdered in 1964 in retaliation for participating in Freedom Summer, a project designed to register voters, perform community service and document racial injustice in Mississippi.

In "Chaney Family as They Depart for the Funeral of James Chaney, Philadelphia, Mississippi," a searing photograph by Bill Eppridge, a little boy in a car full of mourners glares at onlookers while his parents and sisters stare straight ahead.

"Quite an expression from a 10-year-old," Cox says. "You get a sense of him thinking, 'I know you're watching me. I'm watching you.' He was full of anger and later got in trouble, but he's back on track and a very strong spokesperson for civil rights."

Spanning the years between Rosa Parks' resistance against racial segregation in a Montgomery, Ala., bus in 1956 and King's assassination in 1968, the show focuses on major events, including the march from Selma to Montgomery in 1965. Images of impassioned public speakers, arrests, lock-ups, fires and beatings recall a tumultuous period. But other pictures document peaceful determination and ordinary African Americans getting on with their lives in a fiercely segregated society.

Gripping pictures of confrontation all but scream their messages. Other images require explanation: Horace Cort's shot of a white man ostentatiously spraying something over the heads of black sit-in demonstrators at Woolworth's in Atlanta, for example. It's deodorant.

Cox included works by well-known photographers such as Danny Lyon and Bruce Davidson, but he is particularly pleased to have found prints by little-known artists such as anthropologist Doris Derby, who documented Mississippi women doing behind-the-scenes community work.

"I wanted to point out the different motivations and strategies of the photographers," Cox says. "Some were self-assigned to the story, others were working for newspapers and major news agencies or civil rights organizations. The movement leaders, people like King and Ralph Abernathy and John Lewis, were very smart about how journalists, photographers and cameramen could help tell their story to the larger world."

Lyon, an official photographer for the Student Nonviolent Coordinating Committee, took a considerable risk to shoot pictures of incarcerated young girls that helped to secure their release. In other situations, photographers did their work from front row seats at historic events.

Life magazine sent Eppridge and reporter Mike Murphy to Mississippi after the disappearance of Chaney and his colleagues. Prevented from going to the site where the bodies were found, Eppridge rented a plane and took aerial photographs. He also got permission from the Chaney family to photograph their son's funeral and burial.

Rich as "Road to Freedom" is as a photographic record, it's far from the last word on the subject.

"Many of the photographers are holding onto their archives," Cox says. "Even though they have released certain pictures into our collection and the exhibition, there are still big slices of the story that are privately held and yet to be uncovered."
‹ PREVIOUS   |   NEXT ›