As Walter Iooss and Neil Leifer will tell you, sports photographers have good games and bad games. Like athletes, they get better through intense competition.


Having one another as competitors, these two have risen to the top of their game. For that, they are being honored with a joint exhibit, called “Sport: Iooss and Leifer,” at the Annenberg Space for Photography in Los Angeles.

The show opened Saturday, but the collaboration behind it goes back almost 50 years.
Iooss and Leifer really tell it best.

It started at a New York Titans football game at the Polo Grounds that a 16-year-old Walter Iooss (pronounced “Yose”) was watching with his father and a 17-year-old Neil Leifer was photographing on the field for Sports Illustrated. Impressed with the young Leifer’s access, Walter Iooss Sr. went down to arrange a meeting and a portfolio review on behalf of his son.


As a result of that meeting, Iooss started shooting for Sports Illustrated as well. The competition began.

“There was always a rivalry,” Iooss said. “It’s only normal because if you go the same event, whether it was the World Series or a big football game, everyone wanted the same thing, which were the pictures in the magazine.”

The rivalry lasted through the ’60s and ’70s, when the two friends battled each other — and every other shooter — for the coveted S.I. cover and also the inside space. After all, they both had families to feed.

“The space rate was considerably better than the day rate,” Leifer said. “Walter just didn’t miss. He came back with something terrific every week. Therefore, I had to be every bit as good or better if I wanted to hold my own.”

He added, “I like to think that things worked out pretty evenly, but I’ve never kept score.”

If it were a boxing match, it would be difficult to call. Each is regarded as one of the great sports photographers. Each has taken iconic pictures of the world’s best athletes, on and off the field. And each documented, with unprecedented access, a captivating figure of sports history: Leifer followed Muhammad Ali and Iooss, Michael Jordan.

“So at least we each got one,” Iooss said. 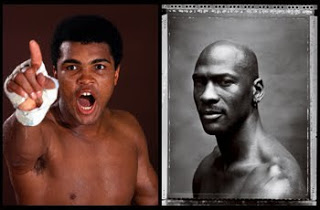 Iooss and Leifer were given access to these athletes because of their previous success and proven abilities, but their own careers and renown rose with that of their subjects.

And here’s the dirty secret: it was easy.

“Muhammad Ali made a hero out of every single journalist,” Leifer said. “Whether you were a writer, a photographer, a television commentator, you got to cover Ali and your boss thought you were a genius. The genius was really Ali.”

Jordan was an equally photogenic subject for Iooss. “It was like traveling with a Biblical character with Michael because everyone in the world, at his peak, wanted to be with Michael and meet him in shake his hand,” Iooss said. “And he had everything, you know, for a photographer. It was like photographing a male model. I always compared him to Elle MacPherson” (whom Iooss has also photographed for the S.I. swimsuit issue).

If you didn’t know their names before, you would certainly recognize the work of Leifer and Iooss through their images of these two athletes. Maybe you have an inkjet printout on your wall of Ali gloating vertically over the more horizontal Sonny Liston, or perhaps an actual print — if you could justify spending more than $10,000 for it. On your coffee table, you might have a copy of “Rare Air,” the comprehensive book Iooss put together from his time on the court, on the road and at home with Michael Jordan. Or maybe you own a television set and have turned it on in the last 40 years.

Wherever you have seen their work, you haven’t seen it as immersively as you will at the Annenberg Space for Photography. This is the third exhibit for the new museum and will consist of 80 prints (40 from each photographer) in addition to 1,000 digital images that will be shown, with commentary from the photographers, on nine-foot-tall screens.

“The Annenberg Space is not to be believed,” Leifer said. “I was blown away the first time I saw it and I am ecstatic about the show.” He added, “From everything I’ve seen in dealing with the Annenberg people, they have very good judgment and taste.”

The Annenberg Foundation, parent organization of the museum, wanted to curate an exhibit of sports photography that would stimulate conversation about society’s collective fascination with sport. The foundation chose Iooss and Leifer not only for their iconic photos, but also because they epitomized sport through their photography.

“We recognized that the two of them were really fierce competitors,” said Leonard Aube, executive director of the foundation.

But the two competitors left the field a long time ago. Leifer left S.I. for a staff position at Time magazine in 1978 and shot over 40 cover stories there. He left Time in 1990 to pursue a career in filmmaking — his current full-time occupation. He will be discussing his most recent film, “Dark Light: The Art of Blind Photographers,” at the Annenberg Space in early February.

Iooss is still a sports photographer but has, since the early ’90s, moved away from action to portraiture — his streak of shooting all 43 Super Bowls notwithstanding. He currently divides his time between Sports Illustrated, Golf Digest (where his son, Christian, is the director of photography and his immediate supervisor), and playing golf — his latest athletic love affair.

The two haven’t vied for the same cover or double truck since the late ’70s. The competition is over and, today, only the friendship remains.

“The idea of Walter and I doing this together at this time in our careers and lives is so nice,” Leifer said. “It’s a real thrill. I have so much respect for Walter and to be partnered with him in something like this is wonderful.”

Please join us at Monroe Gallery of Photography for a Special Holiday Book signing by Neil Leifer. Leifer will be signing copies of his latest book,  "Guts and Glory: The Golden Age of American Football”. There is a special exhibition with a reception for the photographer on Friday, December 4, 5 - 7 PM, and Neil Leifer will sign books that evening and again on Saturday, December 5 from 1 to 3.


"Guts and Glory" contains the best of sports photographer Neil Leifer's 10,000 rolls of football pictures, including hundreds of previously unpublished images. It is a glorious oversize-volume format that weighs 7 pounds, with red-and-white silk cloth overboards and is a limited edition of 1500 numbered and signed copies.
‹ PREVIOUS   |   NEXT ›