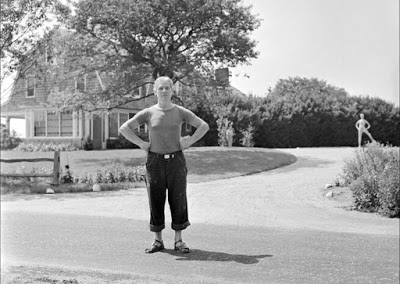 Willem de Kooning, standing in front of Leo Castelli's house, protecting a statue that Castelli himself had made in his driveway. Jackson Pollock disliked it and had threatened to run it over. East Hampton, 1953. By Tony Vaccaro.


Legendary photographer Tony Vaccaro will speak at the Pollock-Krasner House and Study Center, Sunday, May 28, 2017, at 5:00 pm, for the official opening and reception for the exhibit "East End Art World, August 1953, Photographs by Tony Vaccaro."

The exhibition of unpublished photographs has been up since May 4, and features twenty photographs selected by museum director Helen A. Harrison from eleven rolls of film found among Vaccaro's 450,000 negatives and transparencies. Maria Vaccaro, Tony's daughter-in-law, and Grace Ann Taylor, an NYU graduate student specializing in archiving, have both been working on the project for the Tony Vaccaro Studio, Long Island City, for nearly seven months.

Rare images of Tino Nivola, Leo Castelli, Alfonso Ossorio, and Wilfrid Zogbaum, make up some of the new finds. All the photographs on display are for sale, and some may eventually be part of limited editions. Remembering the visit, the 94-year old Mr. Vaccaro says:
“I went to the Hamptons because I was intrigued by Jackson’s work. It just grabbed me. I  knew it was the kind of work that would last forever. I also liked Marcel Duchamp. I had  photographed him on the streets of New York City in 1952. He told me ‘Many artists are  moving to the Hampton’s.’ I also knew Tino Nivola. We spoke Italian when we bumped  into each other on 8th Street. Nivola told me: ‘Many artists are setting up studios on Long  Island. It’s cheaper than New York City. So I kept telling Look Magazine art director  Charlotte Willard that this was a job that had to be done. In the Spring of 1953, Look  editor Fleur Cowles assigned me and Miss Willard to spend a week there. Willard went back to New York City after the week was up. I stayed an entire month.”
The Pollock-Krasner House is located at 830 Springs-Fireplace Road, East Hampton, NY, 11937.

The Pollock-Krasner House press release:
http://www.stonybrook.edu/commcms/pkhouse/exhibitions.php
Monroe Gallery of Photography is honored to announce a major exhibition of more than 50 photographs by Tony Vaccaro at the Santa Fe Gallery this summer. The exhibit opens with a public reception for Tony Vaccaro on Friday, June 30 from 5 – 7 PM. The exhibit will continue through September 17, 2017.