SAVE THE DATES JUNE 30/JULY 1: TONY VACCARO IN SANTA FE

Kiss of Liberation: Sergeant Gene Costanzo kneels to kiss a little girl during spontaneous celebrations in the main square of the town of St. Briac, France, August 14, 1944
94-year Old Tony Vaccaro travels to Santa Fe for screening of documentary and exhibit
Santa Fe, NM -- Monroe Gallery of Photography is honored to announce a major exhibition of 50photographs by Tony Vaccaro.The exhibit opens with a public reception for Tony Vaccaro on Friday, June 30 from 5 â€“ 7 PM. The exhibit continues through September 17.
Monroe Gallery will sponsor a free screening of  HBO Films' â€œUnder Fire: The Untold Story of Private First Class Tony Vaccaroâ€ at CCA on Saturday, July 1, starting at 3:45 pm. The screening will be followed by a Q & A with Tony Vaccaro moderated by former senior editor and reporter for LIFE magazine, Richard â€œDickâ€ Stolley. (Seating is limited, RSVP required to Monroe Gallery by June 28.)
The film tells the story of how Tony survived the war, fighting the enemy while also documenting his experience at great risk, developing his photos in combat helmets at night and hanging the negatives from tree branches. The film also encompasses a wide range of contemporary issues regarding combat photography such as the ethical challenges of witnessing and recording conflict, the ways in which combat photography helps to define how wars are perceived by the public, and the sheer difficulty of staying alive while taking photos in a war zone
Born in Greensburg, Pennsylvania on December 20, 1922, Tony Vaccaro spent the first years of his life in the village of Bonefro, Italy after his family left America under threat from the Mafia. Both of his parents had died by the time he was eight years old and he was raised by an uncaring aunt. When World War II broke out, the American Ambassador in Rome ordered Tony to return to the States. He settled in with his sisters in New Rochelle, NY where he joined his high school camera club.
A year later, at the age of 21, Tony was drafted into the war, and by the spring of 1944 he was photographing war games in Wales. By June, now a combat infantryman in the 83rd Infantry Division, he was on a boat heading toward Omaha Beach, six days after the first landings at Normandy. Denied access to the Signal Corps, Tony was determined to photograph the war, and had his portable 35mm Argus C-3 with him from the start. For the next 272 days, Tony fought on the front lines of the war. He entered Germany in December 1944, a private in the Intelligence Platoon, tasked with going behind enemy lines at night.
After the war, Tony remained in Germany to photograph the rebuilding of the country for Stars And Stripes magazine. Returning to the US in 1950, Tony started his career as a commercial photographer, eventually working for virtually every major publication: Look, Life, Harperâ€™s Bazaar, Town and Country, Newsweek, and many more. Tony went on to become one the most sought after photographers of his day, photographing everyone from Marilyn Monroe and Sophia Loren to Pablo Picasso and Frank Lloyd Wright. He visited Georgia Oâ€™Keefe in Abiquiu in 1960 on assignment for LOOK magazine.

Georgia O'Keeffe, Abiquiu, New Mexico, 1960
Now 94, Tony still carries a camera and puts in six or seven hours without a break; creating prints in his darkroom and identifying jobs for his staff. Tony has won numerous honors and awards,  including the Art Directorâ€™s Gold Medal (New York City, 1963), The World Press Photo Gold Medal (The Hague, 1969), The Legion of Honor (Paris, 1994), The Medal of Honor (Luxembourg, 2002), Das Verdienstkreuz (Berlin, 2004), and the Minerva dâ€™Oro (Pescara, 2014). 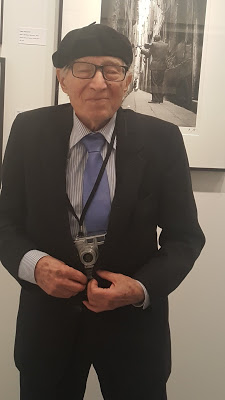 Tony Vaccaro
Since retiring in 1982, Tony has been exhibited over 250 times and has published or been the subject of ten books and two major films. In 2014, the Tony Vaccaro Museum  was inaugurated in Bonefro (Italy). Tonyâ€™s photographs are in numerous private and public collections including The Metropolitan Museum in New York, The National Portrait Gallery in Washington, DC, the Centre Pompidou in Paris, and the Library of Congress in Washington.