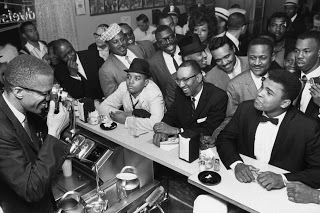 Santa Fe--Monroe Gallery of Photography, 112 Don Gaspar, is pleased to announce an opportunity for the public to meet legendary LIFE magazine photographer Bob Gomel on Saturday, December 27, from 1 to 3 in the afternoon. A special selection of legendary Gomel's photographs will be on exhibition.

Bob Gomel worked extensively during the Kennedy administration as a photojournalist for LIFE magazine. He was frequently assigned to photograph political events, although he perhaps most remembered for his photograph of then 8 - year old John F. Kennedy Jr. standing solemnly at the funeral of his uncle, Robert Kennedy, in front of St. Patrick’s Cathedral in New York. This photograph appeared in a two-page spread in the June 1968 “Special Kennedy Issue” of LIFE magazine.

Gomel has said "“Mr. Fields was my grade school science teacher. His classroom was decorated with beautiful sepia-toned examples of his photography. The image closest to me was a back-lit nightview of a manhole cover on a cobblestone street. It was irresistible. I joined his photography club. I was hooked. WWII ended and I delivered groceries to pay for the first post war camera: a Ciroflex. In no time I took over a closet/cum darkroom in our apartment and began a great adventure which was to last the rest of my life. The French have a expression “joie de vivre”. For me that includes the thrill of making a compelling photograph. That has not diminished over time. I suspect it never will'.
‹ PREVIOUS   |   NEXT ›