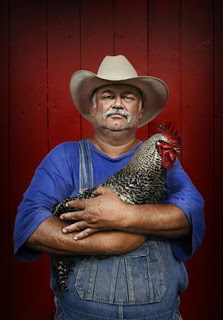 AMERICAN FARMER
From Alaska to Maine, farmers and ranchers are celebrated in a major new book

Monroe Gallery of Photography, 112 Don Gaspar, is pleased to announce a special book signing by Paul Mobley of his new book, “AMERICAN FARMER: The Heart Of Our Country". The book signing includes a reception at the gallery for Paul Mobley on Saturday, December 20, from 5 to 7 PM. Paul Mobley will also be signing books on Saturday, from 9 – 12 noon at the Santa Fe Farmer's Market in conjunction with Monroe Gallery. Selected photographs from the book will be on exhibition through January 11, 2008.

In the photographic spirit of Richard Avedon’s In the American West comes Paul Mobley’s American Farmer: The Heart of Our Country with stunning interviews by Katrina Fried. Featuring more than 200 full-color and black-and-white portraits of farming families across the United States —from cattle ranchers to avocado growers— and including farmers from New Mexico, American Farmer tells the inspiring story of our heartland through the faces and voices of the people who live and work it.
Paul Mobley began his training as a photographer at Detroit’s Center for Creative Studies, and continued in the New York studios of Annie Leibovitz and David Langley, where he apprenticed for many years before embarking on his own career. Mobley has successfully worked with a broad range of corporate, advertising, and editorial clients.
‹ PREVIOUS   |   NEXT ›